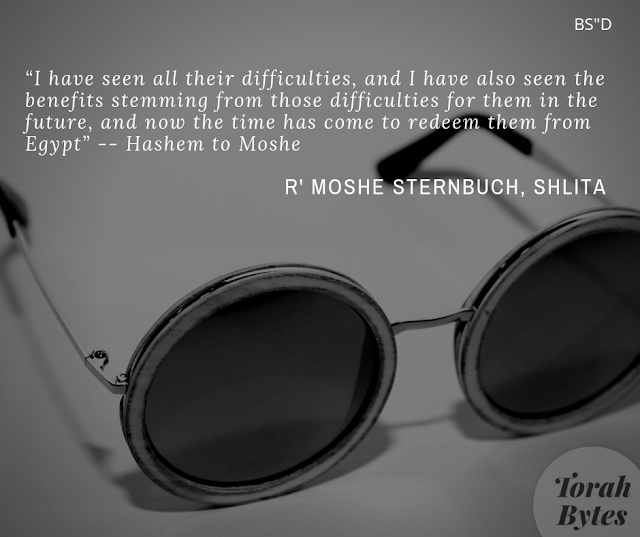 “And Hashem said, "I have surely [ro’oh ro’isi] seen the affliction of My people who are in Egypt” (Shemos 3:7)

The medrash says, “It does not say ‘I have seen’, but rather ‘I have surely seen’. Hashem said to Moshe, ‘you see with one vision, but I see with two visions’”.

Moshe viewed events with the human eye, according to which Jews were suffering terribly, but Hashem looked not only at the present but also at the future, and He knew that for all the suffering the nation was currently enduring they would partake of enormous treasure houses in the Eternal Life. Hence, Hashem was telling Moshe: “I have seen all their difficulties, and I have also seen the benefits stemming from those difficulties for them in the future, and now the time has come to redeem them from Egypt”.

Rav Sternbuch recalls how during the Holocaust Rav Moshe Schneider would say, “We see bodies being burnt, but Hashem sees not only the body but also the soul, and He knows that these events are for the benefit of those souls, so that they may find their rectification, and ascend to the Upper World in order to enjoy the Divine Presence in the special place reserved for those who have died whilst sanctifying the Divine Name.
Rabbi Moshe Sternbuch Shemos