Enticement of the Yetzer Hara #9 : PREOCCUPATION IN SECULAR INTERESTS 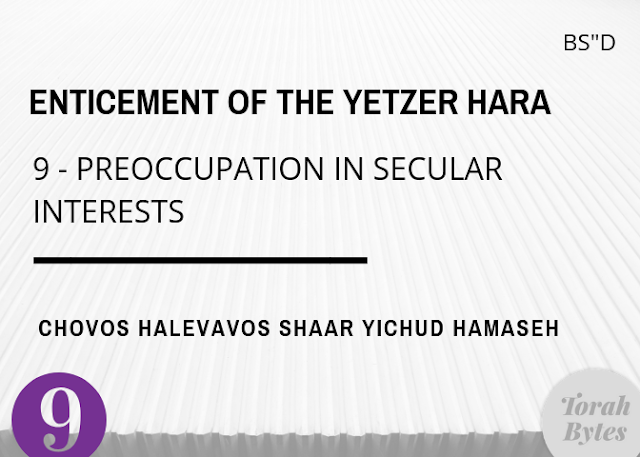 When the yetzer abandons hope of trying to make us doubt in all the previous matters mentioned, he will try to make us lazy in the service of G-d, and will try to preoccupy us in our secular interests - eating, drinking, dressing, riding, and to derive enjoyment from other physical pleasures.

(Pas Lechem: "(1) to preoccupy us in our secular interests - eating, drinking...etc, and to (2) derive enjoyment" - he specified two evils. One, through being stuck in these things and wasting his time in them, he will be preoccupied and without any time for the service [of G-d]. On this, he wrote "to preoccupy us, etc". The second, deriving enjoyment from physical pleasures - they themselves destroy a man's heart, and expand his mind to kick (be ungrateful) like a wild cow. On this, he wrote: "to derive enjoyment".)

And when we listen to him regarding eating, which we cannot exist without, he will make superfluous things that are secondary to food appear so embellished, and rejoicing and pleasure so charming that we will envy kings and their ministers, strive to live like them, adopt their practices, and go in their statutes, in pursuit of physical enjoyments.


(Pas Lechem: "And when we listen to him regarding eating" - i.e. to have intent for enjoyment in the necessary eating, from this he will embellish to us the superfluous things.

"strive to live like them" - in their great [desire of] heart.

"adopt their practices" - to rule over the masses.

"go in their statutes" - the pursuit of physical enjoyment is constant and habitual, a statute that cannot be broken. Like the necessities are for the masses.


Marpe Lenefesh: "he will make superfluous things that are secondary to food appear so embellished" - i.e. the yetzer embellishes to a man to run after the superfluous and the enjoyments which are the causes of all iniquities and all sins, as this is written at the end of the first gate and in the gate of abstinence, "that it is the El Zar (strange god) in the body of a man. see there.)

When the yetzer observes our desire and willingness in this, he will say:

(Pas Lechem: when the yetzer sees that we desire and want in this. He said "desire" which means "yearning" for them, before we attain them, and "willingness", i.e. delighting in them after attaining them.)

"Girdle your loins, bare your arms, O enticed man, exert with all your strength, O seduced man, to serve this world, and to serve its people, and you may attain some of your desire in it. Do not toil in matters of the next world. Rather, only in things which will help you in this world, to find favor (become popular) among the people and the leaders, from kings to the rest of the people."


(Pas Lechem: "Girdle your loins, bare your arms" - i.e. tighten your belt and roll up your sleeves so that the clothing does not encumber you in swift movements. It is a phrase of encouragement to move to action.

"O enticed man" - now that I have found that you are like a friend and brother to me, being that you are enticed from my words, if so, why are you acting sluggishly and not [eagerly] pursuing my matters.)

"Don't exert your mind in any field of wisdom except those which will bring you honor from the public, and favor in the eyes of the great men of your generation, the leaders, rulers, or anyone who occupies a high position. This includes the knowledge of languages, the essentials of prose, fundamentals of grammar, music, charming riddles, amazing parables and unusual sayings. Try to frequently meet with charismatic people, and be knowledgeable of cultures to be able to converse with all types of people and won't sit silent and be considered a fool and a simpleton. Leave the other wisdoms because their work demand is high but their practical benefit is low."

(Pas Lechem: "to converse with all types of people..." - that you become knowledgeable of all worldly matters. And then, when you are among a group of people who converse in their matters, you will also be able to converse with them and will not be forced to be silent and regarded as a fool, etc.

Tov Halevanon: "considered a fool and a simpleton" - in that you don't know of the things happening in the world.)

But if, from the beginning, we did not open a door to the desires and satisfy their wants (i.e. we do not leave any path or entrance to the yetzer - TL), nor accustom ourselves to indulge in superfluous things and chase after them, but instead we reply to the yetzer that we have no need for the superfluous things, and that we already have enough mental anxiety in working to obtain what we need. If G-d sends us extra income without our having to trouble our heart or straining mind for it, we will spend them in the right and proper manner as duty dictates, and if this does not happen, we will be satisfied with the basic necessities, and won't require more than this, then the [power of the] yetzer will be broken and smitten.

But if we listen to the yetzer in these things (to pursue the [physical] enjoyments - ML), we will descend step by step until he has brought us to hopeless destruction in this world and in the next.

All these example illustrations were on the first kind of enticements, which the yetzer uses to cast doubt on a man who is weak in wisdom and in the knowledge of G-d and of His Torah.