Grandfather at the Table (Shemos) 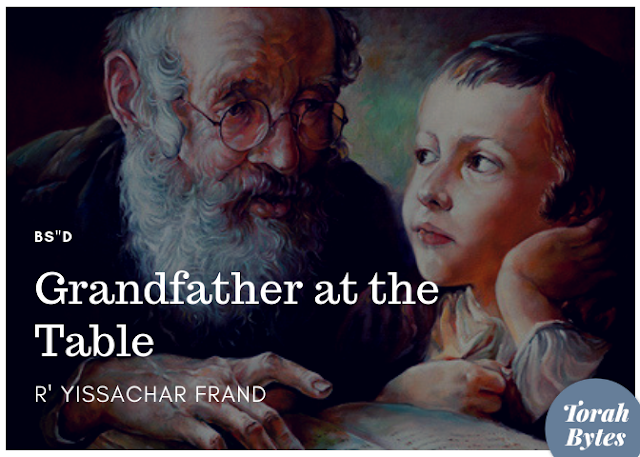 Grandfather at the Table
(from Facebuker Shabbos Table Talk) by R' Yisshochar Frand, edited by R' Jonathan Gerwitz
"And these are the names of the children of Israel who came to Egypt with Yaakov, each man and his family came" [Shmos 1:1]. The Chofetz Chaim (1838-1933) asks why the Jewish people took the spiritual risks of going en masse to Egypt. Egypt was known as being an amoral society and an amoral land. One would have thought that, given such a reputation, it was not the type of place where one would want to raise a nice Jewish family.

There were many noteworthy Rabbis in Europe who, for this very reason, told people that they should not emigrate from Europe to go to America. Going to America circa 1920, circa 1930, was to go to a "treife medina" [a 'non- Kosher' country]. Any person who went to America in that era was taking his spiritual life into his own hands. Observing the Sabbath meant having no job on Monday.

So, what was the rationale and justification for the Jewish nation's descent to Egypt? The Chofetz Chaim says that the verse answers this question with two words - "with Yaakov". Since they went down with the presence of the Patriarch Jacob, they had an anchor and an antidote to guarantee that nothing detrimental would happen to them spiritually. Yaakov would be a shield in the face of the influences of Egypt.

The importance of the presence of Yaakov can be illustrated with the following story: The Chofetz Chaim wanted to live out his final days in Eretz Yisroel, and decided that he wanted to move to the Land of Israel several years before he died (in 1933). However, Rav Chaim Ozer (1863-1940) told him that he was not permitted to leave Europe. Rav Chaim Ozer asked, "What will happen to all the Jews in Europe without you?" The Chofez Chaim responded that he was already an old man who was no longer able to go around and speak to people and have an impact. "I can no longer do any good for anybody in Europe."

This is the import of the words "with Jacob." The Jews were only able to contemplate going down to Egypt, despite its negative influences, because their grandfather, Yaakov, accompanied them.
Facebuker Rebbe Rabbi Dov Winiarz Shemos