How to Avoid the Ayin Hara (Vayechi) 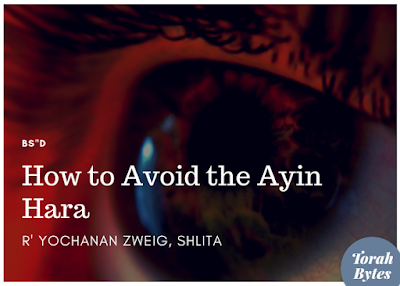 When a person is under siege (any kind - whether by lack of sleep or depression or under the constant scrutiny of others) his body acts in very strange ways. The body is severely weakened and more susceptible to illness, disease, and other maladies. Thus, ayin hora is a very real danger.

In this week's parsha, Yaakov Avinu gathers his sons for a final time in order to bless them before he dies. In actuality, Yaakov Avinu didn't merely bless his children, he actually defined who they were and articulated their strengths (and to some, their weaknesses as well) and the character traits that were to be passed down to their children.

Rashi (ad loc) explains that, among the blessings that Yaakov gave to Yosef, he mentioned that Yosef was impervious to ayin hora or "evil eye." This is based on the Gemara (Baba Basra 118b) that interprets the verse to mean that Yosef's charm was "above the eye" - i.e. beyond the reach of the evil eye. Rashi also mentions that part of the blessing to Yosef's sons (48:16) included that they would multiply like fish. The very same Gemara explains that because fish are covered with water no evil eye controls them.

Perhaps one of the most misunderstood concepts is that of ayin hora. How are we to understand the power of the evil eye and how does it really work? Is it just some mystical concept or does it have some practical understanding from which we can learn how to overcome it, or at least avoid the issue? Rav Moshe Feinstein Z'TL paskened (Even Ha'ezer3:26), "We definitely need to be concerned with the ayin hora, but not overly particular. With these types of matters, the principle is - the one that is not bothered by it, it doesn't bother him." This is difficult to understand. Does ayin hora have real efficacy or is it merely imagined?

The Gemara (Bava Metzia 107b) states, "Rav explained the verse - 'Hashem will remove all illness from you' (Devarim 7:15) as a reference to the ayin hora - the source of most illness. In fact, he once went to a cemetery and discovered that 99 out of 100 had died from an ayin hora, while only one had died from other causes." Obviously, ayin hora is a powerful force, how are we to deal with it?

More to the point: If ayin hora has a real power to it, then how does a blessing to be impervious to the evil eye have any efficacy? For example, one cannot be "blessed" that a knife shouldn't pierce their skin. So is the power of ayin hora real, and if so how does Yosef avoid the negative effects of it?

What does this Gemara mean? How is one supposed to compare himself to those great men? How are they an achievable standard that one should apply in one's own life? In fact, what made those great men so unique that they were able to overcome their own circumstances and successfully conquer their personal trials?

The answer to this questions is actually the key to understanding what ayin hora is, how we are affected by it, and most importantly, how to rise above it.

What made Hillel (and Yosef) so unique? In fact, we can even ask a deeper question: The Torah was given approximately 3,500 years ago, but Hillel lived only about 2,000 years ago. What was the standard for those 1,500 years? In other words, with what did Hashem challenge those that didn't study Torah because they were too poor?

The answer is that they were off the hook. Because the standard of the times was that if a person was too poor then he was too overwhelmed and distracted with making a living. Meaning that almost everyone in the world (as the Gemara above says, 99 out of 100) looks around and sees what are the societal standards and then acts accordingly.

But Hillel changed all this. What made Hillel (and Yosef) so unique is that he didn't look at what everyone else was doing, he looked within himself as to what his true capabilities were.

This is the key: most people choose to live a common life. What do others have? I want that. Before taking action or making a purchase, the thought is how will that make others look at me? This defines how they dress, what kind of car they drive, what kind of house they buy, and what kind of vacations they take. Most people live a life reflective of other people's perception of themselves.

This is very dangerous because gazing at something is a way of exerting control over it (this is also one of the reasons that it is prohibited to gaze at someone that one cannot be with). The Gemara (Baba Basra 2b) calls this Hezek Re'iyah - damage of gazing, and this has halachic ramifications when it comes to real estate because others are able to exert a real type of control.

This type of seeing is very powerful - consider the feeling a person has when he knows he's being watched. This can have a deleterious effect because he knows he is being constantly scrutinized and perhaps even criticized. This scrutiny is the evil eye. By choosing to live the common life through the perception of others, we are allowing the evil eye to control us.

When a person is under siege (any kind - whether by lack of sleep or depression or under the constant scrutiny of others) his body acts in very strange ways. The body is severely weakened and more susceptible to illness, disease, and other maladies. Thus, ayin hora is a very real danger.

So, how are we to avoid it? By taking a cue from Hillel and Yosef - that is, not allowing others to have influence and control over our lives. We must make every effort to judge ourselves and act in accordance with our own potential and not by what our friends or others do. Likewise, we must do things for ourselves and not to impress others, make them think kindly of us, or worse, incite envy.

This is what the blessing to Yosef meant when by "above the eye" - that he was not living in anyone else's reality and did not care what their perception of him was. Instead, Yosef focused on doing things he himself was capable of achieving; no matter what others were doing. This is very hard to achieve, however, if one succeeds then he can avoid ayin horabecause he is no longer operating in the realm of the ayin.

This is what Rav Moshe Feinstein meant when he said that if it doesn't bother you then it won't affect you. If one really doesn't look at others and doesn't subject his life to what others think of him then the ayin hora will not affect him. Unfortunately, most people have a difficult time achieving this. The majority of people care what Yeshivas (or colleges) their children go to and what others think of those schools. They want people to view them as being successful or well dressed. These things are what drive ayin hora and must be avoided.

We should choose Yeshivas based on what is good for each individual child, not care what everyone else thinks is a Yeshiva pedigree. We should drive comfortable cars that we enjoy, not cars that primarily make a statement to our success. We should wear clothing that makes us feel happy, not just scramble to keep up with the fads.

This is what the Gemara means that a technique for avoiding ayin hora is to take one's thumbs and place them in the opposite palms:

The Gemara Berachot (55b) states, "If a man entering a town is afraid of the evil eye, let him take the thumb of his right hand in his left hand and the thumb of his left hand in his right hand, and say: I [inserting his name], son of [his father's name], am of the seed of Joseph over whom the evil eye has no effect, as it is written, 'Ben porat Yosef, ben porat alei ayin.'"

Taken at face value it sounds like merely hocus pocus kabbalsitic rituals. But with our understanding of ayin hora it becomes clear what a person is trying to convey with this act of taking thumbs into one's palms.

The fact that humans (and some primates) have opposable thumbs is very significant; it is what allows one to lock the hand and take things firmly in one's grasp. Having thumbs represents grasping and taking control of something. Thus, a person who wants to avoid ayin hora takes his thumbs into his palms to indicate that he is not in anyone's else's grasp (vis a vis ayin hora) rather he is from the spiritual children of Yosef and is totally within his own domain and impervious to ayin hora.
Ayin Hara Hillel Rabbi Yochanan Zweig Vayechi Yosef haTzadik