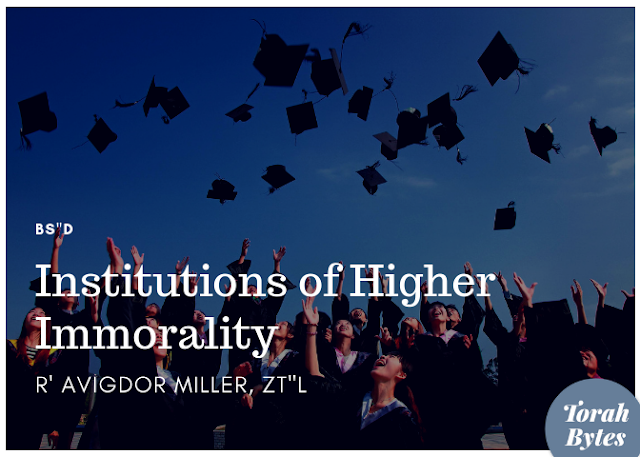 Rav Avigdor Miller on The University Dorms Versus the Mafia Dens

Q:
Why did the Rav say tonight that the colleges are worse than the dens of the underworld?

A:
Because they are. Have you ever attended a meeting of the underworld, of the mafia, let's say? So you'd go to Bensonhurst, to a basement, and they're serving over there beer and lobster and discussing ways and means, let's say, of taking over a garbage collection service from another group of Italians. So, how do you do it? Well, at first you try persuasion. You try to bribe them. And if it doesn't work, you have other methods. Other more persuasive methods.

OK, so they're not tzadikim. But they're not indecent. They're not gays. They go to church. They give charity. They dress like human beings. They have families. They must behave. Their sons and daughters are married. Absolutely they are. They live an ordinary, more our less decent gentile life.

Many of them, many of the Italians, are themselves busy collecting garbage. Only that when it comes to some sort of crisis, then they come together in the basement to decide what to do. And sometimes their methods aren't the best. But otherwise, they're living normal lives.

But if you talk about the colleges, the universities, you must know that they are worse than the houses of ill-repute. Boys and girls get together in dormitories. I don't want to say anything more. The colleges are the places where everything good has been broken down. One example is marriage. Marriage is considered a myth. "The myth of marriage," is what they call it. The colleges are leading the way in breaking down all forms of morality in this country. All forms of wickedness prevail on the college campuses. And therefore, the colleges today are the very worst place in the nation.
TAPE # E-156 (August 1998)
College immorality Mafia Rabbi Avigdor Miller University