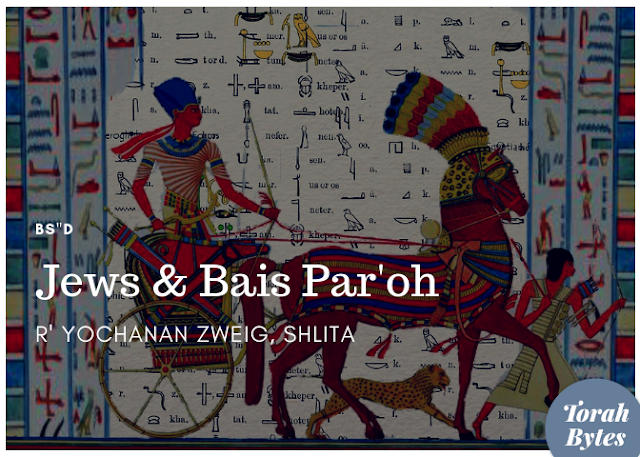 It happened in those days that Moshe grew up and went out to his brethren and saw their burdens... (Shemos 2:11)
This week's parsha introduces Pharaoh's scheme and implementation of the Jewish enslavement. The Torah also discusses Moshe's birth and development, and how he came to be the greatest prophet and leader of the Jewish people.

It is well known that Moshe grew up in Pharaoh's house. Rashi (ad loc) explains that not only did Moshe grow into adulthood, he grew in stature as well. As Rashi explains, "Pharaoh appointed him over his household ('beis Pharaoh')." Rashi by the Aseres Hadibros (20:2) explains that the Jewish slaves were owned directly by Pharaoh and were part of 'beis Pharaoh.' Thus, Pharaoh took the innovative step of appointing Moshe over his fellow Jews.

This was no accident. Many tyrants and despots appoint members of the victim class over the other victims. In fact, in Egypt the "shotrim" were Jewish officers appointed over the other slaves in Egypt to violently enforce quotas (which the shotrim refused to do). Similarly, cruel kapos were the method used by the Nazis to control prisoners in the concentration camps.

Theoretically, this is brilliant. It naturally pits members of the oppressed class against one another and breeds mistrust and deception; thereby destroying the unity of the group - exactly what it is supposed to achieve. Pharaoh also added an insidious twist: By appointing Moshe over them, Pharaoh was showcasing what a Jew can aspire to if he abandons his culture and becomes fully Egyptian.

But Pharaoh underestimated Moshe. He expected Moshe to sympathize with them and, at most, perhaps even advocate for better treatment. Yet Rashi makes a remarkable comment on the words "and he saw their burdens" (2:11); "He focused his eyes and heart to be distressed over them." Moshe didn't merely sympathize and feel pity for them, Moshe empathized with them. Sympathy is merely seeing someone's pain and feeling bad for them; however, empathy is a vicarious experience of what another is going through.

Rashi is telling us that Moshe focused his eyes and heart to see what the slaves saw and feel what the slaves felt; he was seeing their situation from their perspective. In fact, Moshe later uses this understanding in his conversations with Hashem. This is probably one of the reasons Moshe was asked by Hashem to fill the role he did.

This is also why Moshe is sentenced to death for killing the Egyptian. On the face of it, this seems a little strange. A prince growing up in the house of a king rarely would be subject to such justice. But once Moshe kills the Egyptian because of what he did to a "lowly" Jew he undermines Pharaoh's vision for his position in the palace - therefore he must flee for his life.
Moshe Rabbeinu Rabbi Yochanan Zweig Shemos