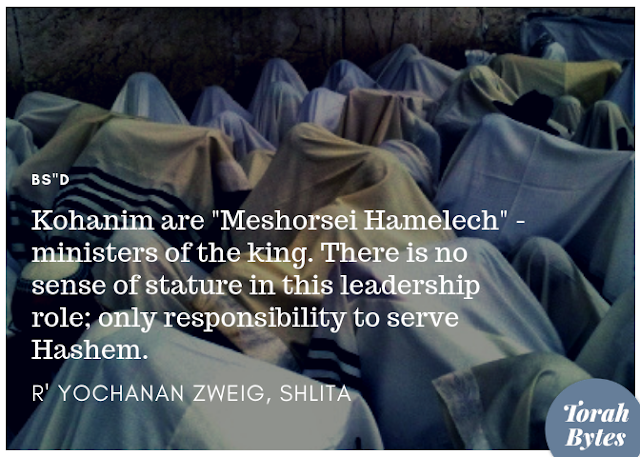 A Calling for Service

The anger of Hashem burned against Moshe and he said, "Is not your brother Aharon the Levi? I know that he will speak, behold he is coming out to meet and when he sees you he will rejoice in his heart" (4:14).
After a full week of trying to persuade Moshe to accept the position of redeemer of Bnei Yisroel, Hashem displays anger toward Moshe. This follows the last of Moshe's objections as to why he should not be the one charged with this responsibility. Rashi (ad loc) explains that Hashem's anger at Moshe's final argument resulted in him losing the position of Kohen, and being "demoted" to position of Levi.

Additionally, Rashi (ad loc) explains that Moshe was concerned that Aharon would be jealous of his new leadership position. Hashem therefore reassured him that Aharon would actually be happy for him. Rashi also points out that it was for this reason that Aharon merited to become Kohen.

This seems a little hard to understand. Certainly Moshe wouldn't accuse Aharon of being a lesser man than he, so this means that had the roles been reversed and he had been in Aharon's sandals, Moshe himself would have been jealous. Why would Moshe be jealous, and if in fact it was natural to be jealous of this appointment, why wasn't Aharon himself jealous?

Interestingly enough, we do find an instance in the Torah where Moshe feels a twinge of jealousy. The Yalkut Shimoni (Devarim 31:941) points out that Moshe experienced jealousy when he saw Yehoshua, his very own student, supplant him as leader of Bnei Yisroel and receive a communication from Hashem that he himself wasn't privy to. Moshe said, "It is better to experience one thousand deaths than to experience one instance of jealousy."

Clearly Moshe felt jealous because he saw his student taking his place, and the pain of seeing the loss of one's own position can be overwhelming. So why didn't Aharon feel jealous? After all, his younger brother was being given a position of leadership that rightfully belonged to him.

Aharon recognized that while it's true that redeeming Bnei Yisroel and becoming their leader was a position of greatness, it's not an appointment. In other words, when Hashem asks you to take this role, it's one primarily of service to Bnei Yisroel and Hashem's plan for the world. This job isn't about the stature that comes with the responsibility, it's about being a servant to that responsibility.

Moshe was bothered by the stature associated with the job. He spends a week explaining why he isn't the right person for this job. When at the end of the week he still feels that Aharon would be jealous of his new position, Hashem gets angry and explains to him that Aharon understands that this is about responsibility to serve - not the associated stature. It is for this reason that Moshe loses the right to be a Kohen and this role is given to Aharon. Kohanim are "Meshorsei Hamelech" - ministers of the king. There is no sense of stature in this leadership role; only responsibility to serve Hashem. Aharon understood that when called to the responsibility of serving Hashem you have to accept and that stature plays no role in the decision.
Kohanim Rabbi Yochanan Zweig Shemos