Leave Justice to the Judge 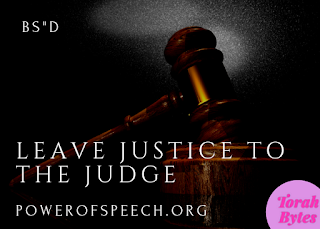 A rebbi had been fired from his job and couldn’t find another one. One day his former principal called and asked him to come back to teach a Navi class, as they hadn’t been able to find a replacement for that position. The rebbi was outraged at the nerve of the principal. He wanted to say no, but would that be nekamah? Would he be violating the Torah’s law against taking revenge on a fellow Jew?

The question went all the way to Rav Chaim Kanievsky, shlita, in Bnei Brak. Rav Chaim answered that technically, refusing the position would not be nekamah, but he offered a story that shed some ad- ditional light on the question.

Shlomo and Chavi had gone out on two dates and felt that there was a strong potential for marriage. Therefore, Chavi asked Shlomo to meet her father, who was unfortunately sick in the hospital. Shlomo did as she asked and for some reason, the father got a poor impression of him. He told his daughter that he did not approve of the match and Chavi, unwilling to argue with her father, broke off the shidduch.

Shlomo was terribly disappointed. He had already envisioned Chavi standing with him under the chup- pah, their hearts overflowing with happiness. Now, on the whim of her father who had met him for just a short time, it was over. Nevertheless, he didn’t object. He knew that Chavi would not go forward without her father’s approval.

Despite Shlomo’s disappointment, he still thought highly of Chavi and was touched by her love and care for her father. He decided that before the relationship was completely severed, he would go to the hospital and visit her father to assure him that he harbored no resentment toward him and wish him a complete recovery.

A few days later, the father was surprised to find Shlomo standing in his hospital room. “I came to let you know that even though I am very disappointed about the shidduch, I wish you only well. You should have a refuah sheleimah.”

Astounded by Shlomo’s generous spirit, the father immediately realized he had made a mistake. Chavi and Shlomo were engaged a short while later.

“So you see,” said Rav Chaim, “a person who had every reason to feel resentment rose above his emotions. He trusted Hashem to determine whatever justice was due, and in turn, Hashem repaid his trust.”

Adapted with permission from Stories for the Jewish Heart, by Rabbi Binyomin Pruzansky

TALK ABOUT IT:
What are some ways of counteracting resentful when we feel someone has done us wrong?