Nothing is Impossible by the Jewish People (Shemos) 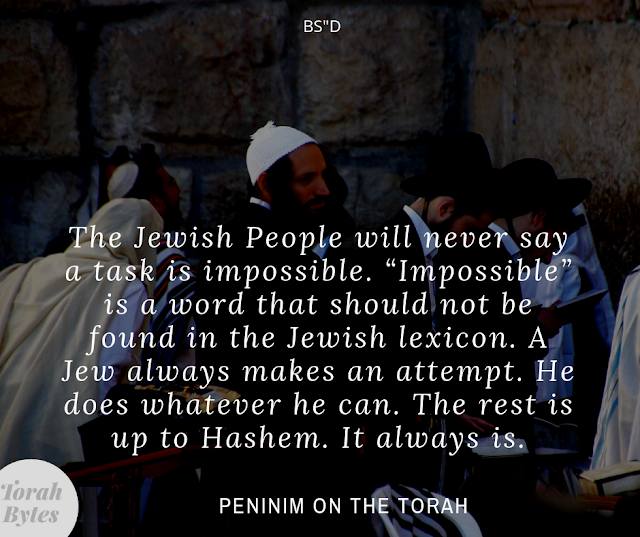 And she sent her maidservant and she took it. (2:5)

The Midrash translates amasah as “her arm” (not “her maidservant”). Thus (since she was not close to the basket), she stretched out her arm to reach the basket, and her arm miraculously became sufficiently elongated to reach the basket. The Kotzker Rebbe, zl, derives from this episode that one should do whatever possible, to never give up, to never say, “I cannot do it. It is impossible.” One should make the attempt; perhaps he will achieve success. Bisyah was distant from the basket. She tried to reach it, and Hashem enabled her. Never say “never,” because everything is in Hashem’s hands.
Hashem told Avraham Avinu, “Look up at the Heaven and count the stars, if you can count them.” Hashem said, “So shall be your offspring” (Bereishis 15:5). Horav Meir Shapiro, zl, commented that if anyone other than Avraham would have been told to count the stars, the immediate response would be, “No way. It is impossible!” The number of stars is infinite. Who can bother counting them? When Hashem “instructed” Avraham to do so, he began counting! Hashem said, Ko yiheyeh zaracha, “So shall be your offspring!” The Jewish People will never say a task is impossible. “Impossible” is a word that should not be found in the Jewish lexicon. A Jew always makes an attempt. He does whatever he can. The rest is up to Hashem. It always is.
Horav Elimelech Biderman, Shlita, relates that when his father was a young boy living in Tel Aviv, one evening there was no running water in their house. His father and his brothers went to sleep that night without preparing a cup of negel vasser, water to wash their hands upon arising in the morning. Their father asked them, “Why did you not prepare negel vasser?” They replied, “When there is no water, one does not prepare.” Their father countered, “That is true, but why did you not at least place the empty cup next to your bed?” A Jew must do whatever is in his ability to do. The rest is (always) up to Hashem. Indeed, when we “do,” He helps.
Source: Peninim on the Torah
Peninim on the Torah Shemos