Praying for the Sick Who Died or Healed 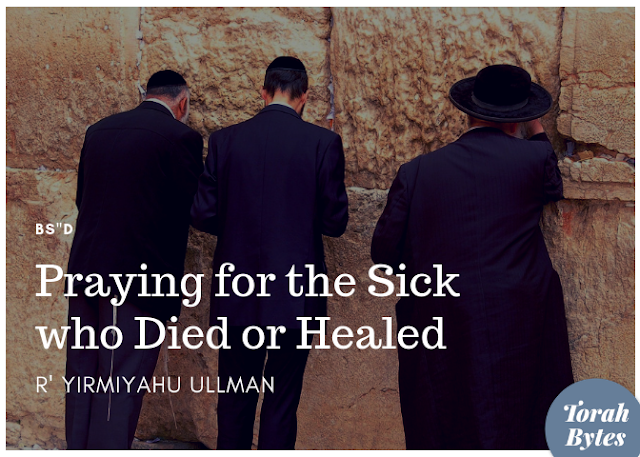 Dear Rabbi,
My question regards mistakenly continuing to pray for someone when that prayer is no longer relevant for that person. And I have two specific cases in mind:

One involves continuing to daven for sick people after they have already passed. This can happen when people don’t update a list of cholim (sick people) to be prayed for, such that those who have died continue to be davened for without an update. Is there any benefit to continue davening in the Refuah section of Shemoneh Esrei for a choleh who has since died?

Another case is the opposite: continuing to daven for cholim who no longer need it because they got well. In this case, is there any harm praying for a healthy person among a list of cholim, as if he were still sick?

Thank you Rabbi for your answers!

These are intriguing questions. It is true that ideally one’s prayers should be as specific and accurate as possible. So, in your first case, praying for the recovery of one who has already passed is certainly off the mark.

And furthermore, since our “power of speech” does have an effect, we avoid even unintentional negative speech, like saying to someone by way of illustration, “Suppose you were sick…” We avoid this for fear that these words of speech will actually bring sickness upon the well person. So, your second case, referring to a well person in the powerful context of prayer as sick, might be harmful.

However, that being said, the Talmudic Sages taught that mistaken but well-intentioned prayer is received lovingly by G-d, who considers the prayer as if it had been uttered in the correct form. In Song of Songs, metaphorically describing the loving relationship between G-d and the Jewish People, Israel says about G-d, “I accept His banner (diglo, דגלו) lovingly” (4:2).

The Talmud teaches that G-d’s version of this verse in praise of Israel is reversed: “I accept his mistake (dilugo, דילוגו) lovingly”.

Accordingly, if for no other reason than one is sincerely praying for the welfare of another, even in mistaken form, G-d endearingly receives the prayer as if it had been offered in the correct way. So, whether one is praying for the recovery of another who has already passed, or, alternatively, for one who has already recovered, such prayer will be directed toward the appropriate venue to benefit the one being prayed for.

What’s more, it seems that in the scenario you are asking about, namely praying for people you don’t know personally, and about whom you might not be updated regarding a change in their status, it might be appropriate and helpful to have the following idea in mind.

It is true that praying for a refuah, recovery, refers to the person’s return to health in this-worldly terms. However, one can also have in mind that in case the person has since passed, the intention of the prayer should be to remove spiritual malady, curing the departed soul and restoring its original spiritual health so that it may thrive in the spiritual realm together with G-d.

Conversely, one can also have in mind that in case the person has been cured of the specific malady, the intention of the prayer should be to remove all and any residual or lingering effects or traces of that malady, or any other form of imbalance, be it physical, mental, emotional or spiritual, which would render the person not entirely well (and, indeed, who, even among the healthy, can say they are entirely free of any ailment?) such that including him among the prayers of recovery for the sick would not be entirely unfounded.

In this way, your benevolent prayer on behalf of others, whether they are still plagued by their current illness, or have passed on and seek spiritual well-being, or have been cured of the specific illness but could benefit, as we all can, from even better health and more strength in any number of ways, is beneficial and accepted lovingly by G‑d.
Cholim Prayer Rabbi Yirimiyahu Ullman Refuah Shemoneh Esrei Sick Tefilah

This is an English translation of the letter signed and dated by HaRav Moshe Sternbuch, shlita, Ra'avad of Yerushalayim, on March 26, 2020 attached below. Be”H Rosh Chodesh Nissan 5780 Due to our many sins a plague has spread amongst the Jewish nation in all their places of residence, and the whole world is on fire and raging. Sorrow and sighs are rampant in many Jewish homes. It is the time of divine wrath, and the gemoro (Menochos 41a) explains that when divine wrath is prevalent in the world, Hashem punishes even for positive commandments, which He usually does not do. Therefore, during these times we must be exceedingly careful about our actions to make sure that they do not contain any flaws with regard to positive commandments, and all the more so with regard to negative commandments. In addition, we are obligated during these times to conduct an account of actions, and to improve whatever needs to be improved. Let us search our ways and examine them and return to Hashem, there…

Teshuva for Speaking Loshon Hora If one spoke loshon hora and wishes to do teshuva, the halacha is as follows:

If no damage was caused to the subject, for example, the listeners did not accept the defamation, the speaker must still repent for his averah ben adam laMakom (between man and G-d) - transgressing the prohibition of speaking loshon hora, which is assur even if no harm was effected. This includes the 3 components of teshuva:Charatah (regret)Vidui (confession) (to Hashem only)Kabbalah (a sincere acceptance for the future to avoid transgressing again)If the listeners did accept the speaker's words, thus causing damage or suffering to the subject, then, in addition to the violation of Hashem's commandment and the accompanying teshuvah, he MUST also ask forgiveness from the subject for the hurt he has caused him, as with any averah bein adam lachavero (between man and his fellow). Even if the subject does not know about the loshon hora and the damage caused to him, the sp…

Derive No Benefit from Xmas Lights

Rav Avigdor Miller on Admiring the X-mas Lights Q:Is there anything wrong with admiring the colorful lights that the our non-Jewish neighbors hang up during their holiday season?

A: It's very wrong to admire anything that is in any way connected to avodah zarah. Of course it's wrong! תזרם כמו דוה - "You should throw it away like something that is unclean" (Yeshai'ah 30:22). It's disgusting. And even if you don't think so, you must tell yourself that it's disgusting. You must train yourself to think properly. The lights are disgusting. Chas ve'shalom to admire the lights.