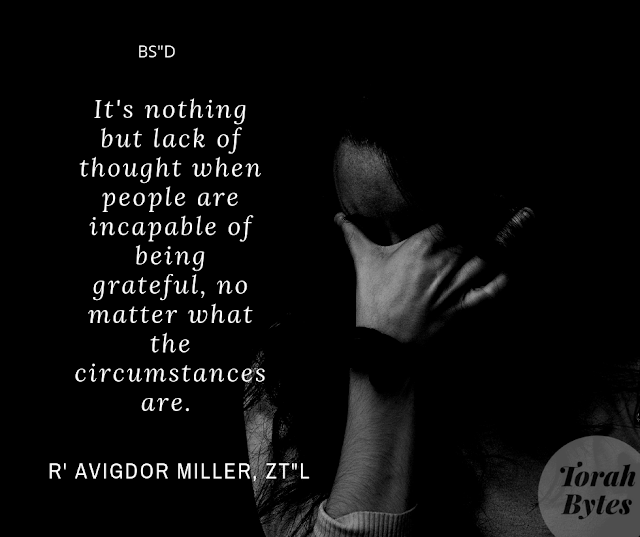 How can a poor and sick person (we'll leave out the sick person for the time being, let's first study a poor person) how can he fulfill ivdu es Hashem b'simcha?

This poor man, let's say he's sick too now, (I'll make you happy, we'll make him sick too) I'm just joking, and now he's going to a specialist. A specialist, even a kind hearted specialist, takes $350. So this poor man asks if the doctor takes Medicaid and the answer is no, the receptionist tells him it's cash. So he pays $350, and suppose the specialist would hit him on the nose, I don't mean physically, but he'll guess exactly what's wrong with him, and the poor man will get a miracle cure and go home cured. He's still poor but he's not sick anymore. How will he feel on the way home? He'd be singing on the way home with happiness, he'd be walking on the clouds! he wouldn't know what to do with that specialist, he'd be so happy he'd worship him! He'd send cards to him every year; people do that.

Of course it never works that fast, even if a specialist does guess the correct diagnosis, but the cure is so gradual that by the time it's effective the man thinks that he himself could have gotten cured, and he regrets that he gave the specialist the $350. But if he is convinced that it happened through the specialist then he's grateful. So now here is a poor man, he's so happy he's delirious.

Now suppose this poor man never became sick, shouldn't he be just as delirious? On the contrary, he's $350 richer! So here is a chance for a poor man to be happy. So you say a poor sick man, let's say he remains sick, after visiting the specialist he remains sick.

Suppose a poor sick man is able to emigrate from Moscow and come to New York. That man is treading on the clouds, despite his poverty and his sickness.

Therefore there isn't a person in the world - like the Mesilas Yeshorim says - there is not a human being in the world that doesn't have cause whether he's well or ill, rich or poor, who doesn't have abundant cause to be grateful. One of the biggest reasons for gratitude is that he is still alive! The poor sick man is trying his best to stay alive, isn't he? Therefore the fact that he succeeds in remaining alive is a very great happiness.

And it's nothing but lack of thought when people are incapable of being grateful, no matter what the circumstances are.