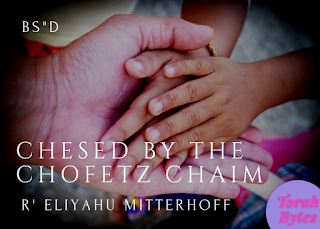 
At the end of the Parsha after Yaakov died, Yosef said to the brothers, “Fear not, for am I instead of G-d? Although you intended me harm, G-d intended for good.” He was trying to comfort them. He said, “I will give out food for you and your young ones,” thus he comforted them and spoke to their heart.

One time in the Yeshiva in Radin there was an older man named Hershel Kaminetzer. He never got married because he had a lung disease. It was Yom Kippur night and after everybody left the Beit Knesset, the prayer house, he sat there by himself, lost in his thoughts.

The Chofetz Chaim was the Rosh Yeshiva. He came and sat next to him, and began talking to him. The Chofetz Chaim told him how he had lost his father when he was 10 years old. He exiled himself to a place of Torah. He had a lot of trials and tribulations. He lived in poverty.

The maskilim, the enlightenment movement, tried to pull him away from his orthodoxy. He told him how he agreed to marry his step-sister – this is the Chofetz Chaim speaking – who was older than him. He married his step-sister, only to keep the peace between his mother and his step-father, while his friend found a wonderful wife with a $10,000 dowry.

He told him, “You know what? In the end, that guy lost all of his money, and my wife helped me to stay in learning. I became a Rosh Yeshiva.” The Chofetz Chaim said to him, “What appears at a time to be a problem can sprout salvation. By Hashem are man’s footsteps established.”

He was comforting this man who was already a little bit older – not married, and he was not going to get married. This was the night of Yom Kippur, and he spoke of these things all night.

Nothing was said about spiritual accounting, and nothing about the awe of the Day of Judgment. He just spoke words of consolation and strength. Even though it was Yom Kippur evening, a time for teshuva, repentance, the Chofetz Chaim sat and comforted him.

Just as Yosef did for his brothers, we see that making another person happy or helping them to be at peace is a spiritual act that rises above so many others
Chesed Chofetz Chaim Rabbi Eliyahu Mitterhoff Rabbi Jonathan Gerwitz