The Olive Branch Part I - How To Measure Success 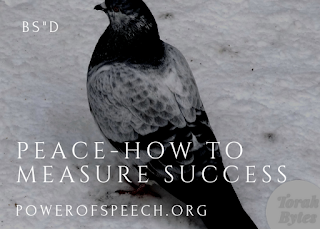 Making peace, dropping grudges, asking forgiveness and giving it often prove to be the key to releasing a person from troubles and bringing brachah into his life. We hear countless stories of people who suffered terrible difficulties until they awakened to the fact that there was an outstanding grievance blocking their mazal.

But what happens when people humble themselves, set a wrong right, mollify someone they’ve hurt or forgive someone who has hurt them and then....nothing? They don’t give birth nine months later; they don’t recover from their illness; their financial fortunes don’t take a turn for the better. Did the peace-making effort fail?

It didn’t fail. If we make peace with a fellow Jew, we succeed in achieving the most important thing we can achieve. We make Hashem happy. We give our Father in Heaven nachas.

“Banim atem laHashem,” the Torah tells us (Devarim 14:1-2). “You are children of Hashem.” The greatest joy a father can have is to see his children acknowledging their bond. They may be very different from each other in dozens of ways, but they are still there for each other’s celebrations and times of need. Even if they don’t enjoy the same activities or hold the same views, they don’t become estranged. By identifying with each other, they identify with the family their parents strove to create. There’s nothing sadder for parents than seeing their family crumble.

In the same way, Hashem relishes peace among His children. Whenever we strengthen or restore it, we succeed in bringing Him happiness. The “miracle story” we hope for might not come about, but we can be sure that our effort isn’t wasted.