Various Names of Moshe and their Meanings (Shemos) 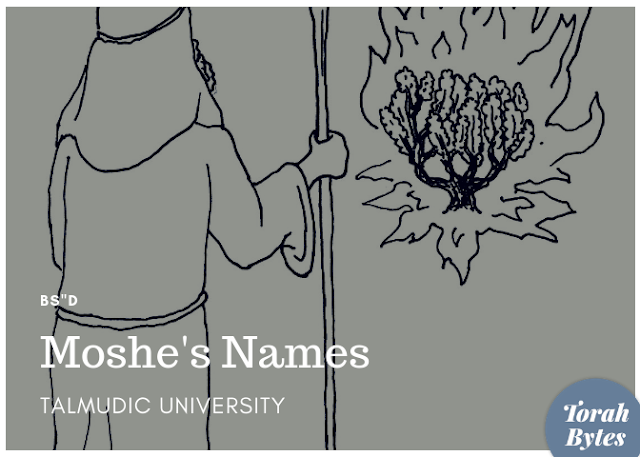 Various Names of Moshe and their Meanings

In this week's parsha, Moshe was born hidden from sight, and subsequently found by Pharaoh's daughter Basya. The Torah says that Basya named him Moshe, one of his famously numerous names. Let us examine some of his other names and how they came to be. Based on the Midrash (Vayikrah Rabbah 1:3):

Yered (ירד), implying "descent": According to one opinion, Moshe was called this name because he brought the Torah down to the Jewish people, and the Shechina back down to this physical world.

Avigdor (אבי גדור): He was the chief one of those who made fences (safeguards) around the Torah.

Chever (חבר): One view is that Moshe joined (חיבר) the Jewish people with Hashem (Eitz Yosef, citing Gra), or because he prevented (העביר) disaster from coming to this world (Matnos Kehuna).

Avi Socho (אבי סוכו): Moshe would grow up to be the father of all the Neviim who see (סוכין) through Ruach Hakosdesh.

Yekutiel (יקותיאל): One opinion says that he caused Bnei Yisroel to look with hope (קוין) towards Hashem.

Tuviah (טוביה): "She saw that he was good (טוב)" (Shemos 2:2). There's an argument (Shemos Rabbah 1:20) as to whether his name is Tov or Tuviah. Moreover, whether it means he was fit for nevuah, that he was born circumcised, or that when he was born the whole house filled with light.

Shemayah ben Nesanel: Hashem heard (שמע) his prayers about the golden calf, and he was the son (בן) to whom the Torah was given (נתנה) from Hashem (א-ל).
Levi (לוי): Named after the shevet to which Moshe belonged.

Moshe: In Egyptian, Moshe means son. Basya took him as a son (Ibn Ezra). Alternatively, it comes from the Egyptian word "mo" (water) and "uses" (drown from) (Josephus, Antiquities 2:9:6). Some sources state that his Egyptian name was Monius (Ibn Ezra). Interestingly, Hashem told Moshe, "I will call you only by the name you were called by Basya" (Vayikrah Rabbah 1:3).
Moshe Shemos Talmudic University