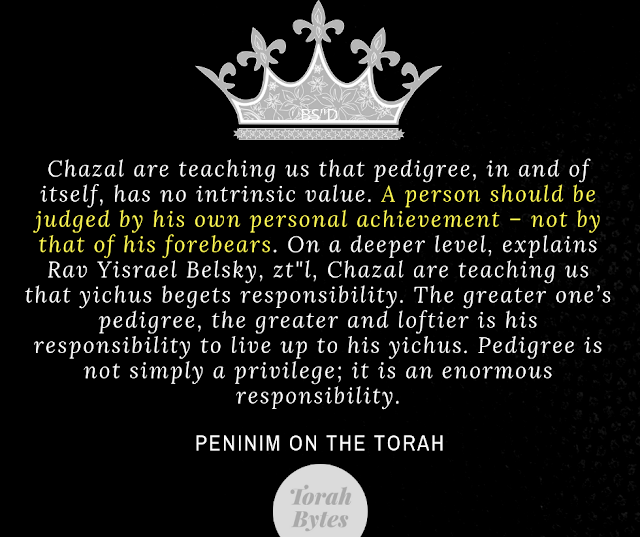 Because the midwives feared G-d, He gave them houses. (1:21)

Rashi explains that these houses were the houses of Kehunah, Leviyah and Malchus. Horav Yisrael Belsky, zl, expounds on Rashi, demonstrating that what appears to be a homiletic interpretation (bayis/house is a structure of wood and stone – not a family. Thus, one must apply an interpretive approach in order to translate bayis to be a family) is actually the definitive meaning of the word. The Torah here defines bayis as the continuation/extension of the family unit: Bais Aharon barchu es Hashem, “House of Aharon, bless Hashem.” When we say this, we are expressing the fundamental nature of the descendants of Aharon HaKohen. Not only is each Kohen a physical descendant of Aharon, but he is also a living continuation of Aharon’s work and represents the fundamental principles and values which he established. Thus, when Kohanim perform their priestly duties, such as blessing the people, they call to mind that as descendants of Aharon HaKohen/Bais Aharon, they represent continuity. Aharon lives on through their commitment to upholding the duties of Kehunah. Each of them is the living embodiment and extension of the first Kohen, the Patriarch and Progenitor of Bais Aharon.
A debate takes place in the Talmud Menachos 53a concerning the value of yichus, pedigree, with the Rabbanan positing that one who has great yichus is worthy of great honor. Indeed, his presence at a function elevates and gives eminence to the function. Rabbi Preida disagrees, contending that it all emanates from his Torah scholarship. If he has developed a high degree of erudition, then he is certainly deserving of honor. If, however, his only worthiness is his pedigree, then he is far from honorable.
Essentially, Chazal are teaching us that pedigree, in and of itself, has no intrinsic value. A person should be judged by his own personal achievement – not by that of his forebears. On a deeper level, explains Rav Belsky, Chazal are teaching us that yichus begets responsibility. The greater one’s pedigree, the greater and loftier is his responsibility to live up to his yichus. Pedigree is not simply a privilege; it is an enormous responsibility.
The offspring of Aharon HaKohen (this applies to anyone who carries the “yoke” of yichus upon his shoulders) carry the priestly responsibility. They may not relinquish it. They are obligated to carry the tradition of Aharon HaKohen and lead a life of harmony with the principles of Bais Aharon. They are Aharon HaKohen’s living legacy. If they fail to honor that tradition, they are dishonoring Bais Aharon. Therefore, Va’yaas lahem batim means that Hashem imbued the yiraas Shomayim, G-d-fearing characteristic that personified both Shifrah and Puah, deeply within the character of their descendants. Yiraas Shomayim became a family trait, part of their familial DNA. These families who were noted for their spiritual achievement, their ability to rise above their inclinations, who served as exemplars of yiraas Shomayim, heralded from Shifrah and Puah. Chazal identify these families as Leviim, Kohanim and Melachim.
Source: Peninim on the Torah
Peninim on the Torah Shemos