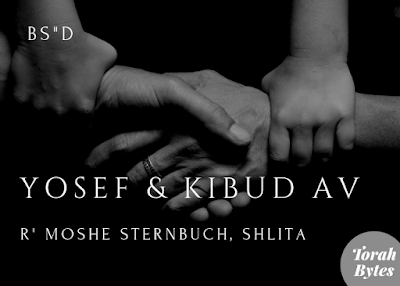 HONORING PARENTS DURING THEIR LIFETIME based on the droshos of rabbi moshe sternbuch, shlita

And Yosef fell on his father's face, and he wept over him and kissed him (Bereishis 50:1)

Why does the possuk mention Yosef’s reaction and not that of his brothers? Surely they also wept.

Yaakov’s sons cried not only because of his passing, but also because they had now lost the opportunity to perform the mitzvah of honoring their father. That unique lack upon the passing of a parent is also the reason why someone who loses a parent must tear his clothes until his heart is revealed, and not merely the upper item of clothing, as is required of those who lose other close relatives.

Hence, when Yaakov passed away Yosef cried more than his brothers due to the intense pain he felt that he had not been privileged to perform the mitzvah of kibbud av during the many decades during which had been separated from his father (from the age of 17). Since his outpouring of emotion was the most intense of all the brothers, his tears are mentioned by the possuk because they are considered to be the main tears shed for Yaakov Ovinu after his death.

This should inspire us to perform the mitzvah of kibbud av voem whilst our parents are still alive. Unfortunately, many people have regrets after a parent passes away that they did not perform this mitzvah properly during the parent’s lifetime, and even though it is possible to perform this mitzvah even after a parent passes away (see Kiddushin 31b), the reward of those who honor a parent during his lifetime is greater (several poskim hold that kibbud av after death is only miderabonon, and even those who hold that it is mide’oraiso, the main mitzvah is during the parent’s lifetime.