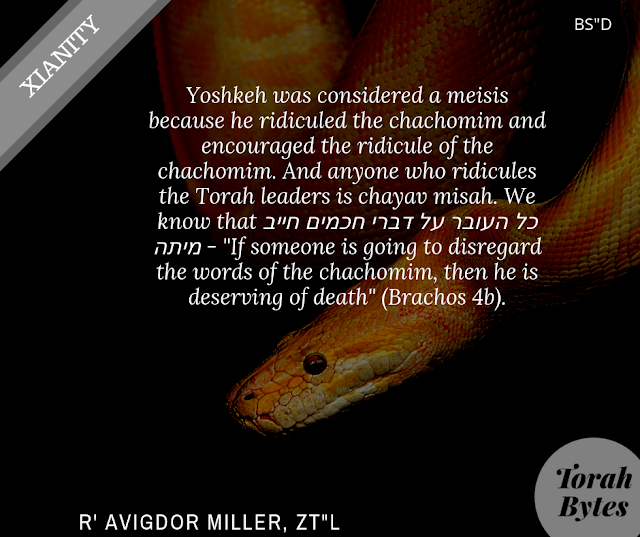 
Q:
The Rav said tonight that Yoshkeh was basically an observant Jew and that it was only the later Christians who created a new religion. But then why is Yoshkeh called a meisis in the Gemara?

A:
Yoshkeh was considered a meisis because he ridiculed the chachomim and encouraged the ridicule of the chachomim. And anyone who ridicules the Torah leaders is chayav misah. We know that כל העובר על דברי חכמים חייב מיתה - "If someone is going to disregard the words of the chachomim, then he is deserving of death" (Brachos 4b).The chachmei hatorah are the light of our eyes. They are the einei ha'eidah, the eyes of our people. And a loyal Jew views the world through the eyes of the chachomim. And so if a fellow in the street is walking around with a few bums following him, and he's making jokes against the chachomim, and ridiculing them and encouraging others to ridicule them, then he has lost his right to exist. That's a meisis.

But did Yoshkeh himself worship avodah zarah? No, no. He wouldn't even think of avodah zarah. You have to know that he was a Jew. And if sometimes you find statements that are attributed to him that seem to imply differently, those may be due to the later writers who put things into his mouth as if he said it. But it's not mistaber that he said it. No, it's not logical that those are his words. Because we know that he was a Jew. He said the following - and I'm telling you what it says in the New Testament - "If anyone were to oppose even a jot or a tittle of what's in the Torah" - that means even a yud or a tag - "then that man has no place in this world."

All Jews were like that in ancient times. Only that he opposed the chachmei hatorah. And that we know. We know that he opposed the sages and tried to rally people to this cause. And that is a tremendous aveirah, a terrible sin. That's why we call him a meisis.
TAPE # E-186 (April 1999)
Mamzer Meisis Rabbi Avigdor Miller Xianity Yoshke