A Jew in Love with Hashem (Mishpatim) 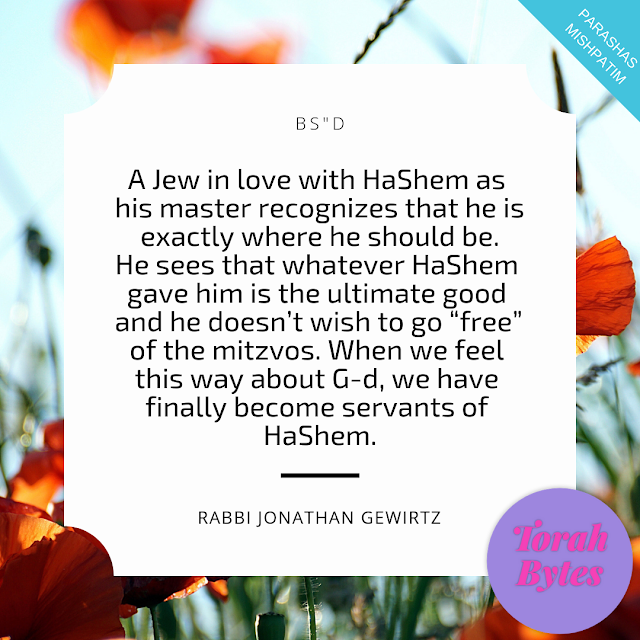 “…I love my master, my wife, and my children, I will not go free. (Shmos 21:5)
When a Hebrew slave completed his six-year term, he was to go free. However, if he decided that he liked the situation, he was allowed to choose to stay. However, because HaShem is not pleased with his choice, the slave is taken to the doorpost (symbolic of where the blood was placed in Egypt) and his ear (which heard HaShem say that the Jews are His servants) is pierced. He then remains in servitude until the Yovel year.

If G-d is not happy that the man has chosen to serve a person instead of Him, why give the man the option at all? Why not just require him to go free?

The reason the man was in this position was because he didn’t respect others and their property. We therefore house him with a person who will treat him as a Jew should properly treat others in hopes that he will learn from the experience. If he doesn’t get the message now, hopefully he will get it in the ensuing years until Yovel. At that point, if he doesn’t get the message, he’s out of luck and will have to go back to fending for himself, and perhaps that will push him towards HaShem in prayer and trust.

The law of this slave, however, has a very powerful message for all of us.

Most people clamor for freedom. They want to be able to do what they want, when they want, and not have anyone tell them what to do. Not so this fellow. He likes the situation he’s in and wants to stay there.

While it isn’t ideal, there is one redeeming quality. As we explained, the master chosen to take in this Hebrew slave is obliged to treat him with deference. If there is only one pillow, the slave gets it, not the master. He may not give him menial tasks to do. The master must even support the man’s family for the entire time he is a slave, and undoubtedly he oftentimes lost out financially. The master took in the thief because he was a tzaddik, a righteous man.

Living with a tzaddik, the thief may realize that it’s worth being connected to such a person even if there are strings attached and he is limited. While it is improper for him to be that enamored of his human master, that is exactly how we should feel about HaShem.

A Jew who truly connects to HaShem and recognizes that it’s the greatest place in the world for him doesn’t find the Torah’s laws constricting. He says, “I love my Boss! He is the greatest.” He says, “I love my wife and my children.” The people in question in the posuk are the wife given to him by his master, and the children are those born to him from that union. While the Hebrew slave is looking at an earthly master, a Jew in love with HaShem as his master recognizes that he is exactly where he should be.

He sees that whatever HaShem gave him is the ultimate good and he doesn’t wish to go “free” of the mitzvos. When we feel this way about G-d, we have finally become servants of HaShem. This attitude is a good reason for this concept to be prominent in the Torah.
Jewish Slave Mishpatim Rabbi Jonathan Gerwitz