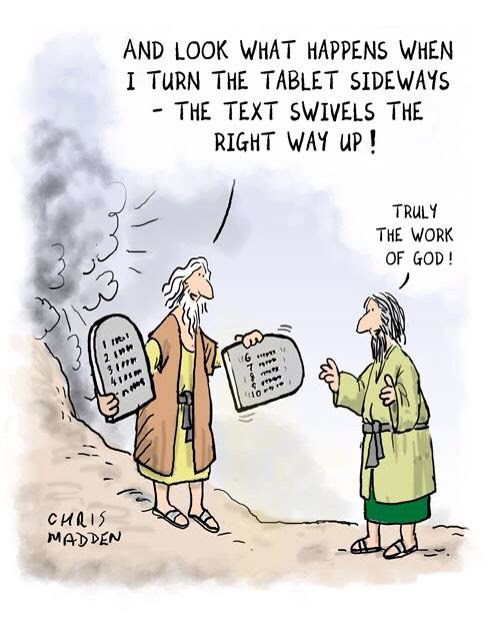 In this week's parsha, Hashem gives us the Aseres Hadibros (Ten Commandments) on Mount Sinai.
Moshe delivered them to Bnei Yisroel on two tablets (stone, not on iPads) with five on each. The question is, why specifically two tablets? Why not one or five or even ten tablets?

The Mechilta d'Rabbi Ishmael (Chapter 8) explains that the Aseres Hadibros are arranged in this way so that they can also be read horizontally (1-6, 2-7, etc.) as well as in the standard order. Each of the horizontal pairs of the Ten Commandments reinforce each other as follows:

First and sixth: Everyone is made in the image of God; therefore one who commits a murder is also attacking the image of Hashem (Mech. d'R. IshmaelCh. 8).

Second and seventh: One who worships a false god is considered to be violating his sacred relationship or "marriage" with Hashem (Mech. d'R. Ishmael Ch. 8).

Third and eighth: Someone who steals will end up swearing falsely - i.e. will come to be using Hashem's name in vain (Rashi on Shir Hashirim 4:5).

Fourth and ninth: One who does not observe Shabbos is falsely testifying that God did not create the world in six days and rest on Shabbos (Mech. d'R. Ishmael Ch. 8).

Fifth and tenth: Those who fail to honor their father and mother usually fail to do so because they feel that they are the center of the universe and their parents were fortunate to have them as a child. They don't feel any sense of obligation towards their parents, rather they feel whatever they have is owed to them, because everything is about them. This attitude will inevitably lead them to feeling entitled and coveting that which others have.