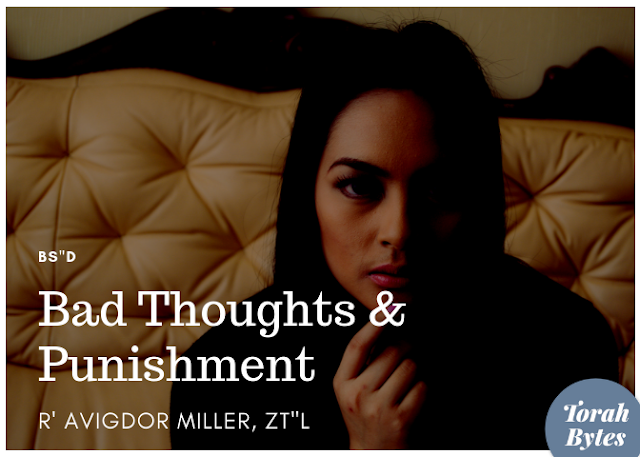 Q: It states somewhere that a person is punished בידי שמים for any bad thought even though he didn’t do it l’maaseh. But that seems to be contradicted by a statement in the gemara: חישב לעשות עבירה ונאנס ולא עשאה – If a man wanted to an aveira but he didn’t because something prevented him, it’s not considered like he did it.
A: Now, this was treated at length in previous lectures. But briefly, it’s like this. When a man wants to do something bad; let’s say he wants to break a window of a jewelry store. And so he picks up a brick and he walks over to the store window. Then he sees a policeman standing nearby. So he begins to whistle, he put his hand in his pocket and he walks off.
So the gemara says, נאנס ולא עשאו, if something prevented him from the aveirah, it’s considered as if he did not do it; even though it seems like he wanted to. But we have to learn p’shat properly. Now many people won’t accept this p’shat, but it’s the truth. It means that it’s considered by us as if he didn’t do it, not by Hashem. Why by us? Because we say that probably you wouldn’t. Probably in the last moment, since you’re  a tzadik – you’re basically a good man, you’re not a window breaker – so probably you would have changed your mind anyhow, even without the policeman. And that’s why the gemara qualifies the statement and says: Suppose this man was a confirmed window breaker; he did it before, he’s made a habit of breaking into jewelry stores. So the gemara says that for him, it is considered like did it. Because we know that he probably would have done it if not for the policeman.
But when it comes to Hakadosh Baruch Hu, He knows! So it depends. Does Hakadosh Baruch Hu know you would do it? If yes, so it’s considered like you did it. And if He knows that you wouldn’t have done it anyhow, that you would make the right decision and put the stone down, so He considers it like you didn’t do it. So when you say “It’s considered like he didn’t do it,” it means considered by us. But by Hakadosh Baruch Hu it depends on what the facts are, that’s all.TAPE # 203 (January 1978)
punishment Rabbi Avigdor Miller thoughts

This is an English translation of the letter signed and dated by HaRav Moshe Sternbuch, shlita, Ra'avad of Yerushalayim, on March 26, 2020 attached below. Be”H Rosh Chodesh Nissan 5780 Due to our many sins a plague has spread amongst the Jewish nation in all their places of residence, and the whole world is on fire and raging. Sorrow and sighs are rampant in many Jewish homes. It is the time of divine wrath, and the gemoro ( Menochos 41a) explains that when divine wrath is prevalent in the world, Hashem punishes even for positive commandments, which He usually does not do. Therefore, during these times we must be exceedingly careful about our actions to make sure that they do not contain any flaws with regard to positive commandments, and all the more so with regard to negative commandments. In addition, we are obligated during these times to conduct an account of actions, and to improve whatever needs to be improved. Let us search our ways and examine them and return

Teshuva for Speaking Loshon Hora If one spoke loshon hora and wishes to do teshuva, the halacha is as follows: If no damage was caused to the subject, for example, the listeners did not accept the defamation, the speaker must still repent for his averah ben adam laMakom (between man and G-d) - transgressing the prohibition of speaking loshon hora, which is assur even if no harm was effected. This includes the 3 components of teshuva: Charatah (regret) Vidui (confession) (to Hashem only) Kabbalah (a sincere acceptance for the future to avoid transgressing again) If the listeners did accept the speaker's words, thus causing damage or suffering to the subject, then, in addition to the violation of Hashem's commandment and the accompanying teshuvah, he MUST also ask forgiveness from the subject for the hurt he has caused him, as with any averah bein adam lachavero (between man and his fellow). Even if the subject does not know about the loshon hora and the damage c