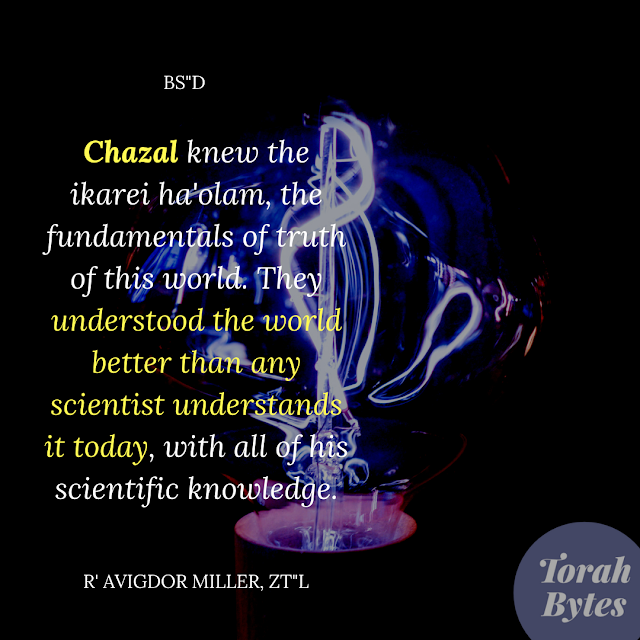 
Q:
Is one obligated to believe that the Tannaim and Amoraim knew modern science and mathematics?

A:
You're not obligaged to believe such a thing. Let's say you had a broken air conditioner, and so you called in Eliyahu Hanavi to fix it, and he didn't know how to fix it. Would that be a p'gam, a deficiency, in the greatness of the navi?! That's ridiculous!

So why should you expect that they should know all of the technology of today?! What they knew, is more important than all the wisdom of today. They knew the ikarei ha'olam, the fundamentals of truth of this world. They understood the world better than any scientist understands it today, with all of his scientific knowledge. And that's because the scientists understand just the pratim, only the details; but the general rules, the k'lalim of the world and of life, they don't understand at all. Not at all! They're all confused, and they learn wrong p'shat in all the k'lalim. What they are, are highly educated fools. The kadmonim, the early sages, on the other hand, knew clearly and perfectly the whole mihaleich, the structure and path, of history, as well as the ways of the world - even the ways of nature in general. But pratim, details, that's not important. And therefore, the fact that the technologists of today can repair air-conditioners, or scientists know details of biology or any other science, does not make them superior in the least. Not at all!
TAPE # 624
Chachamim Mathematics Rabbi Avigdor Miller Science STEM Technology