Enticement of the Yetzer Hara #11: Strive To Find Favor With Human Beings 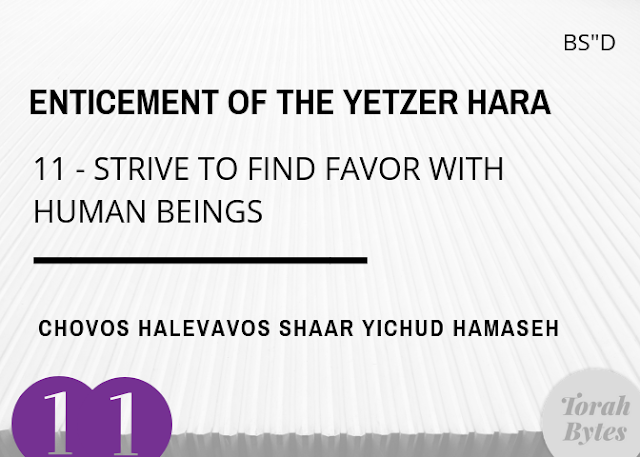 We have already mentioned in this gate regarding the ways in which the yetzer tries to cast doubts in a man's mind. If he is not successful in raising such doubts, he will attempt the method of arguments and proofs in order to revoke the truths of his faith. When you stand up to his superficiality and the weakness of his proofs and he is not capable of standing up to you, nor of annulling what you know to be clear and true of the matters previously mentioned in this gate, he will return to flatter you and mislead you in regard to yourself.

He will say to you: "How I rejoice for you on your good faith and devoted heart to G-d. You have already reached a degree of piety which others in your generation have not been able to reach (i.e. you are among the just and pious -ML), and you have already thanked G-d sufficiently for His goodness and kindness to you. Now it is proper for you to also work to pay your debts of gratitude to your fellow men. Because you already know that they are means to your benefit and harm, and it is clear also that when they like you, you will be honorable in their eyes. But if they are angry with you, you will incur losses. Therefore, endeavor in things that will please them and that will find favor in their eyes, as our Sages said: "One who is pleasing to his fellow men, is pleasing to G-d. [But one who is not pleasing to his fellow men, is not pleasing to G-d]" (Avos 3:10).

(Pas Lechem: The matters of your benefit must come through human beings since a man is social by nature. You are also liable to be damaged by them if you are not loved and considered important in their eyes.
"endeavor in things that will please them" - (1) that your deeds will please them, namely, some favor and benefit that you do to them. (2) And on self-embellishment before them without benefiting them he continued: "and that will find favor in their eyes".)


Answer the yetzer:
"What will I benefit from finding favor with someone who is weak like me, who does not have the ability to help me or harm me (see gate of trust), and the verse says: 'Withdraw yourselves from man whose [life] breath is in his nostrils, for by what should he be esteemed?' (Yeshaya 2:22). And even if it were my duty, how could I possibly find favor with all my contemporaries when I don't even have the ability to find favor with the members of my own household?!"

And likewise, when you see a man whom everyone, young or old, praises him and finds favor in his deeds, it is a proof that G-d has implanted love of him in their hearts, and established a good name for him on their tongues. The Creator does not do this for those He hates. And this is a clear and powerful proof that the Creator is pleased with him. But that a pious person should exert himself and strive so that others will praise him due to his service of G-d - this is not the way of the pious.

(Pas Lechem: Just like if one's enemies make peace with him, it is a sign that G-d is pleased with him, so too if the public loves him, without any exertion on his part, it is a sign for this. Hence, the intent of the sages teaching ("One who is pleasing to his fellow men, is pleasing to G-d") is only as a sign. And the sign is only valid if there is no exertion on his part.
"And this is a clear and powerful proof that the Creator is pleased with him" - because love of good simply because it is good, not because of any enjoyment or benefit received - this is something found only in virtuous men. However, in this case, all the public praises and loves him. Then, certainly this is not a natural love and must be from [divine] providence.)

Therefore, be careful of this or similar things among the enticements of the yetzer toward you. Because he will try to lead you in this until he topples you in the trap of [the trait of - PL] flattery.

(Marpe Lenefesh: this is the complete flatterer, who worships human beings. He is like the idol worshipper, as written earlier in chapter 4.

Translator: Nevertheless, Rabbi Avigdor Miller zt'l would say that you should make every effort to try to make people like you because this makes you into a better person. It is not a contradiction to here. The intent of the author is that your motive should be to serve G-d when doing this, not to try to obtain some benefit from people, as the author brought in the Gate of Trust ch.4 category 3: "The person, whose motive in fulfilling their wishes is one of the [reprehensible] motives we mentioned above, will not obtain what he wants from them in this world. He will tire himself for nothing, and will lose his reward in the afterlife. But if his sole motive is to serve G-d, the Al-mighty will help them to make a return to him in this world, and G-d will place his praise in their mouths and they will hold him in high esteem, and he will reach the great reward in the Olam Haba.." see there)

And even if I were doing enough according to my knowledge of my duties to G-d, would this be enough of an expression of gratitude to the blessed Creator for even the smallest benefits He bestows on me? And what is the measure of my days relative to the measure of the days of the universe? Even if it were equal to the age of the universe, it would not be enough time for me to recount all the favors G-d has bestowed upon me. How much less then is it possible for me to repay my debts of gratitude to G-d for them? (since even to recount all of them, all the days of the universe does not suffice. All the more so, to repay for them with service - TL) And scripture has already said: "All flesh is like grass, and all its kindness is like the flower of the field" (Yeshaya 40:6), and our Sages said "If I am not for myself, who is for me? And if I am only for myself, what am I? And if not now, when?" (Avos 1:14).

Pas Lechem: All kindness that a man does to his Creator is insubstantial, like the flower of the field which is charming to the eye but has nothing substantial in itself.

Tov Halevanon: "If I am not for myself, who is for me?" - These words are directed to the understanding. (Not to the yetzer.) If I don't watch over myself using my understanding to stand up against the arguments and lusts of the yetzer, who will help me? For the free will is granted to me and there is no outside help.
"And if I am only for myself, what am I?" - even if I were free from the yetzer in my mind (as the Talmudic saying for emancipation (Gitin 85b): "you are for yourself"), and I could serve G-d according to my knowledge, "what am I", would this be enough of an expression of gratitude to the blessed Creator, etc., as he wrote above.
"And if not now, when?" - This is corresponding to what he wrote: "what is the measure of my days, etc.", i.e. since all the days of a man and even all the days of the universe do not suffice for the due service, if so, if one wastes one second from the service of G-d, when can he ever repay this?)
Chovos Halevavos Rabbi Avigdor Miller Yetzer Hara