Evolutionists and the Right Scientists 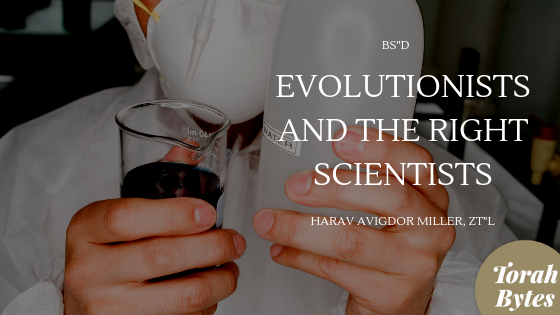 Q: How do I respond to someone who shows me the recent article about evolution in the Jewish Action and tells me that evolution is true, but that it was caused by Hashem?

A: The answer is, Bereishis barah Elokim. And it says there what He did on the first day, and on the second day, the third day, the fourth day, the fifth day, the sixth day and Shabbos was the seventh day. The seventh day, not the seventh period of a billion years. Shabbos was the seventh day. A one-day Shabbos. And if it's a one-day Shabbos, then the sixth day was also one day. And the fifth day was one day, and the fourth day as well. That's how all of our kadmonim have learned pshat. And anybody who comes along and says differently is influenced by the resha'im.

Let me explain something to you. Today there is no excuse at all to be influenced by the resha'im. There is a movement of scientists towards a belief in the creation of the world as we believe it. Many scientists - they are Christians but many of them are outstanding scientists - have written many works, books and research papers and scholarly articles, showing that the world is young. It's a young world. There are now many independent ways of showing that. They can show it from the Niagara Falls, according to the breaking down, the erosion, of the rocks over which the falls descend. At that rate, it shows that it is something that happened within thousands of years. It has only been a few thousand years.

In his two great works, Worlds in Collision and Ages and Chaos, Velikovsky has shown that a very great destruction took place recently in this world. That's why in some places they find whales on top of mountains. Whales on top of mountains?! Yes, because there were oceans there. A great flood changes things. Even smaller floods make great changes. The Mabul could change things in quick ways. Changes that others try to explain with millions and billions of years.

Now, why do they try to explain it with millions of years? Not because they have evidence. They have no clear evidence that it was millions of years. They have absolutely no evidence that it was millions of years. It's only because evolution cannot happen without those years. Even the meshuganeh, crazy idea that from one cell a whole organism developed, couldn't happen in those years. It's as stupid as possible. It's like saying that from a fountain pen, a typewriter will develop. Or a computer. They create millions of years because it would take many gradual changes to accumulate - many miraculous changes - in order for an organism to develop. But even that is as silly as can be.

But today there are scientists who show that the world is a young world. So why do you have to be more pious than these gentiles? There are plenty of gentile scientists who say that the world is young and that the world was created in six days. They say that we don't have to look for anything more than six days. And anybody who yields to the outside environment is only being influenced by his assimilation into the outside world. It's the assimilation of your mind into the foolishness and lies of the outside world. We shouldn't yield to the environment. And we have plenty of good reasons not to. First of all, and most important, the Torah tells us the truth. All the Gedolei Yisroel of all the generations never countenanced such a thing like it says in that article. That the Nachmanidies - the Ramban - wouldn't mind saying that Adam and apes came from the same source?! That's such a shtus. An apikorsis. A terrible chillul Hashem what the Jewish Action did!

And it's not only our Torah, our mesorah. But we have scientists - people who have credentials - writers, researchers. And a whole army of them. And they say that there is absolutely no evidence at all for evolution. So, besides our Torah ha'shleimah - and the Torah speaks openly about it - but the facts of science speak to us too. So why listen to the falsified science of those who want to reject the truth? Listen to the true science of the others. And those who listen to the falsified science are just weaklings who are buckling and yielding to the wicked environment.