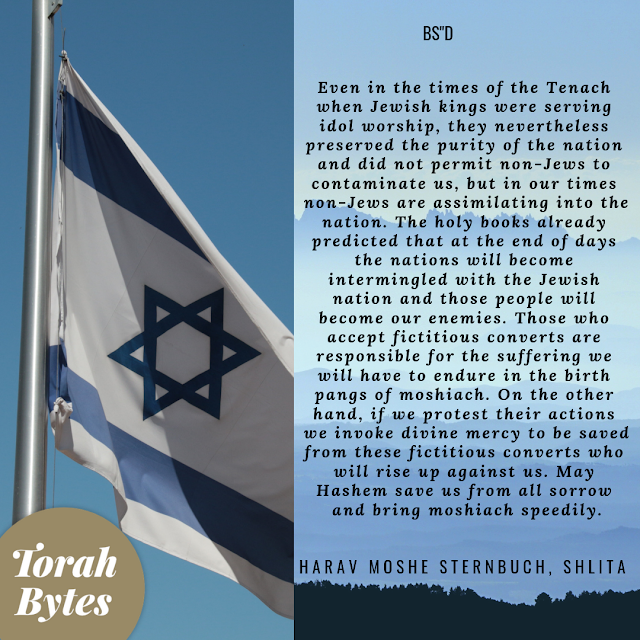 based on the droshos of HaRav Moshe Sternbuch, shlita
And Moshe told his father-in-law everything that Hashem had done to Paroh and to the Egyptians on account of the Jews, all the hardships that had befallen them on the way, and that Hashem had saved them (18:8)

We can understand why Moshe told his father-in-law about the miracles that had taken place, since it is a mitzvah to publicize them, but why did he tell him about the hardships (keriyas yam suf and Amolek – Rashi) which they had endured?

The Maor Vashemesh explains that Moshe was worried that Yisro wanted to convert because he was interested in the benefits the Jews had obtained, namely the miracles which they had witnessed and their salvation from the Egyptians, and if that was his motivation, it would be preferable for him not to convert at all, since Chazal say that converts who convert for such motives are more difficult than sapachat (Yevomos 47b) (literally “a sore on the skin”, but here: an external, subsidiary group: see Maharal ibid), because they do not accept upon themselves the yoke of heaven, and afterwards if they endure difficulties, are likely to rebel. Therefore, Moshe wanted to inform Yisro that it is not all plain sailing for the Jews in this world, and they have to endure difficult periods because of the nations of the world. (Similarly, a prospective convert is told about stringencies and punishments in order to dissuade him and to determine if he is sincere and acting for the sake of Heaven).

Yisro nevertheless responded, “Blessed is Hashem etc.”, thereby emphasizing that he intended to convert for the sake of Heaven, having enquired after every form of idol worship in the world and finding them all futile, he wanted to nestle under the wings of the Shechina and accept the yoke of Torah and mitzvos for Hashem’s sake.

The Maor Vashemesh adds that just like there are two types of converts, those who seek to avoid physical trials and enjoy the benefits the Jews enjoy, on the one hand, and those who seek to join the Jewish nation due to their love of Hashem and their desire to attain spiritual benefits, on the other hand, so too are these aspects reflected in two types of Jews. One type serves Hashem primarily in times of trouble when they turn to Him for assistance. Although the avoda of such Jews is very important in the eyes of Hashem, since it is dependent on the motive of obtaining a physical benefit, it is potentially fickle, and once they have obtained it, they are likely to revert to their previous ways. By contrast, the avoda of righteous Jews who serve Hashem due to their love of Him is consistent, genuine and enduring, since it is not dependent on ephemeral causes.

Unfortunately, in our times hundreds of thousands of non-Jewish immigrants in Eretz Yisroel have undergone fictitious conversion processes under the auspices of the State. Even though they never intended to become observant and accept the yoke of mitzvos upon themselves, they found rabbis willing to convert them. Chazal tell us that Hashem only rests His Presence upon “families with a good lineage” (Kiddushin 70b). This means that Hashem will not rest his Shechina upon us if we do not ensure that non-Jews do not assimilate amongst us.

Even in the times of the Tenach when Jewish kings were serving idol worship, they nevertheless preserved the purity of the nation and did not permit non-Jews to contaminate us, but in our times non-Jews are assimilating into the nation. The holy books already predicted that at the end of days the nations will become intermingled with the Jewish nation and those people will become our enemies. Those who accept fictitious converts are responsible for the suffering we will have to endure in the birth pangs of moshiach. On the other hand, if we protest their actions we invoke divine mercy to be saved from these fictitious converts who will rise up against us. May Hashem save us from all sorrow and bring moshiach speedily.
Converts Rabbi Moshe Sternbuch Yisro