Free Will? At What Price? 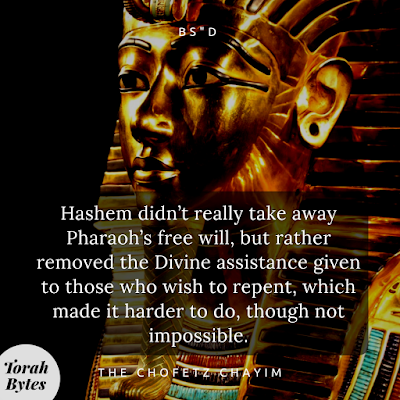 Free Will? At What Price?

by Rabbi Jonathan Gewirtz, from Facebuker Shabbos Table Talk
“…Come to Pharaoh, for I have hardened his heart, and those of his servants, so that I might place My signs in his midst.” (Exodus 10:1)

Many, including the Rambam (Maimonides) and other great thinkers, ask how Hashem could have taken away Pharaoh’s free will and not allowed him to repent. Further, if G-d DID harden his heart, how could Pharaoh be punished for his stubbornness in not letting the Jews go?

The Rambam himself writes that the removal of free will, the inability to repent, was a punishment to Pharaoh, having reached a “point of no return” from his previous choices. The Chofetz Chaim writes that Hashem didn’t really take away Pharaoh’s free will, but rather removed the Divine assistance given to those who wish to repent, which made it harder to do, though not impossible.

The Sforno comments that hardening Pharaoh’s heart actually preserved his free will, by not forcing him to bend merely because of the pain he and his nation endured in the plagues. Had he repented then it would only be because he wished to end his own suffering. However, there may be a further understanding here, which explains why it was necessary to harden Pharaoh’s heart.

The posuk/verse says it was “to set My signs within him.” In other words, G-d wanted to teach Pharaoh a lesson. That’s why Pharaoh survived, even when his people were dying.

This concept is especially key according to the Midrash/Commentary which states that Pharaoh didn’t die at the Reed Sea, but survived, and later became the king of the great city of Ninveh. This is the city to which Jonah was sent (it’s a whale of a story) to warn the people that Hashem was displeased with their behavior. Spurred on by their king (none other than Pharaoh himself) repent fully and are spared.

In other words, the signs and wonders that Hashem instilled in Pharaoh in Egypt may not have worked to save the Egyptians, but they did work to save the 120,000+ inhabitants of Ninveh. In actuality, then, hardening Pharaoh’s heart was a great kindness in that Hashem allowed Pharaoh to “get the message” of what Hashem wanted. It enabled him to grow and evolve past his megalomania to recognize that he was subject to Hashem’s Divine rule, and ultimately enabled him to repent fully and completely.

This is a very heartening lesson for all of us to keep in mind when we experience difficulties. We may feel that G-d is punishing us, or even “having fun” with us. This couldn’t be further from the truth. When Hashem sends us troubles, most often it is a learning experience, intended to teach us to recognize Hashem’s mastery, and how to respond to future events.

The final piece of the puzzle is that Hashem not only gave Pharaoh more suffering, but He hardened his heart to enable him to withstand it. Hashem never gives us more problems than we can handle. This could be a source for that axiom. Hashem let Moshe know that in order to teach Pharaoh a lesson, He gave him more strength to withstand the tests.
This should teach us all a lesson as well.
Bechira Bechiras Chofshis Bo Free Will Rabbi Jonathan Gerwitz