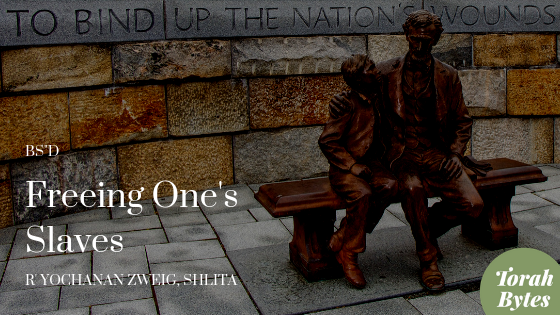 And Hashem spoke to Moshe and to Aharon, and gave them a charge to Bnei Yisroel... (Shemos 6:13)
The Talmud Yerushalmi (Rosh Hashana 3:5) derives from this passuk a fascinating teaching: R' Shmuel son of R' Yitzchak asked, "With what did he charge Bnei Yisroel? He charged with the mitzvah of Shiluach Avadim (freeing one's slaves)." Remarkably, according to the Talmud Yerushalmi, the very first mitzvah that Hashem asked Moshe to command the Jewish people was to free their slaves.

At a glance, this can be difficult to comprehend: Why would the mitzvah of freeing one's slaves have the importance of being the first mitzvah given to the nation as a whole? One would expect that perhaps the mitzvah of Shabbos or keeping kosher or family purity laws would surely take precedence.

Furthermore, none of the Jews even had any slaves at this point, and the law couldn't even be observed until they settled in their homeland of Eretz Yisroel! Why charge them with amitzvah that could not even be fulfilled at the time, and why give it the importance of being the first mitzvah they were commanded to do?

Psychological studies show that those who were abused as children have a tendency to become abusers themselves. Obviously, not everyone abused as a child becomes an abuser; but studies show that there is a threefold higher risk for abused children to become abusers later in life. Psychologists have offered a few possible reasons for this link. One of the prevailing theories is that children rationalize this abuse by thinking that abuse is normal behavior. So as they mature they don't fully understand that the behavior is wrong, and therefore don't have the same barriers in place to prevent such behavior.

This is problematic for a few reasons: 1) if someone experienced something difficult or painful he should be more sensitive to it, and thereby take extraordinary measures to ensure that he does not cause the same pain to another, particularly a child and 2) this reasoning doesn't explain why they would have a stronger tendency toward deviant behavior. At some point in their lives they would certainly learn that society considers such abuse wrong. Why shouldn't that be enough to stop them?

A much more compelling theory is that an adult who has unresolved issues from being abused as a child acts out as a way of coping with the feelings of helplessness experienced as a child. In other words, those abused become abusers to prove to themselves that they are no longer helpless victims. By becoming abusers they psychologically reinforce within themselves that they are no longer the ones abused.

We see this in many other instances as well. Smokers who are finally able to quit for good often become crusaders and feel compelled to lecture others to quit smoking; overweight individuals who manage to lose weight are suddenly weight loss experts and have no problem sharing their opinions about how much you should weigh; religious leaders struggling with their own demons become virulent anti-smut and lascivious behavior crusaders, yet nobody is surprised when scandals about them emerge. These "crusades" are merely a coping mechanism for their unresolved issues.

This is exactly what Hashem is telling Bnei Yisroel. You have been slaves now in Egypt for close to two hundred years. Bnei Yisroel needs to emotionally deal with the fact that they are now truly free and no longer slaves. One of the ways to emotionally get past one's own slavery would be to have and hold on to slaves of your own. This is why Hashem commanded them to observe the mitzvah of freeing slaves. The ultimate proof that they have internalized their freedom and are in a healthy emotional place, is the fact they no longer need slaves of their own. At that point they will be truly free.
Rabbi Yochanan Zweig Vaera