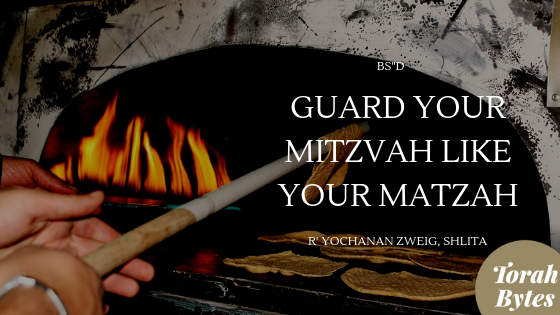 And you shall guard the matzos... (12:17)
Rashi (ad loc) explains that guarding the matzos entails being very meticulous in their preparation in order to prevent them from becoming chometz (leavened). Rashi goes on to quote the Mechilta (Bo, parsha 9), "R' Yoshia says - Do not read the word 'matzos' rather read it 'mitzvos' (although vowelized differently, the word matzos is spelled exactly the same as mitzvos) - just as people do not allow the matzos to become chometz (by delaying the process to completion), so too they shouldn't allow mitzvos to become "leavened." Rather, if an opportunity to do a mitzvah presents itself, do it immediately."

In other words, just as we have to be meticulous in our process preparing dough to become matzo (eliminating all unnecessary delay), so too we must have the same attitude of immediacy toward fulfilling mitzvos.

Yet the analogy seems flawed; if one delays doing a mitzvah, he can do it a little later or, at the very worst, he lost an opportunity. But if one fails to prepare the dough for matzos properly, he has created a far worse situation: he now has chometz on his hands, which on Pesach is a serious transgression. How are these two ideas analogous?

Generally, people delay or push off doing things they wish to avoid doing. Procrastination is usually not a problem of time management or of planning. People simply delay doing things they don't want to do. If we ask our children to clean up their room, even if they finally acquiesce, getting them to actually do it is often a battle. Imagine if after finally getting them to pick up their room we now ask them to set the table, and then clear and wash the dishes. Pretty soon they will begin to resent doing things we make them do and begin to object.

Unfortunately, doing mitzvos can fall into the same rut. If one doesn't perceive mitzvos as opportunities, but rather as onerous obligations, one will begin to resent doing them. Pretty soon one will delay and push off fulfilling them. Eventually, those delays will become noncompliance, which leads to nonobservance. When we force our children to get up, wash their hands, daven, make brachos, and the like, we are actually well on our way of getting them to resent doing mitzvos. In other words we are on the derech of getting them "off thederech."

We must slowly educate our children that mitzvos are really opportunities. Chazal tell us exactly how to do this; give them incentives every step of the way. Show them that learning Torah and doing mitzvos can be rewarding. When it comes to doing things like studying Torah and mitzvos the Gemara (Pesachim 50b) teaches, "Metoch shelo lishma ba lishma - if one begins by doing things for a selfish reason he will eventually come to do it for the proper reason."

After a while a person begins to realize how meaningful it is to begin the day off with a conversation with Hashem, or how intellectually stimulating and enjoyable studying Torah can be. There are very few mitzvos that aren't accessible to the emotions or intellect.

This is what Chazal mean by we should not delay fulfilling mitzvos. We should perceive every mitzvah as an opportunity for ourselves; not merely as something we have to do.
Bo Mitzvah Rabbi Yochanan Zweig