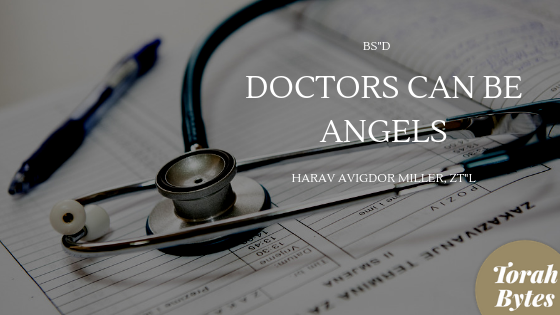 They hear sometimes from me great respect and admiration for the members of the medical profession, yet I criticize the institutions of higher learning such as the college and university campuses. Now, doesn't the Torah say vrapo yerapei, you should heal? Which means you need doctors.

I think this kashe is not too difficult to explain; it's a remarkable thing that this illustrates tonight's point exactly. The medical profession is actually one of the great demonstrations of the glory of Hakadosh Baruch Hu, and I'll give you a moshol taken from the sefer Cheshbon Hanefesh, a great sefer by the way.

Shlomo Hamelech we know made a famous throne. You'll find a description of his throne in Targum Sheini onMegilas Esther. He made a remarkable throne that was all clockwork; Shlomo had a good head. His throne was made that when you stepped on the first step of the throne, two lions on each side turned their heads androared at you. It was an ordeal, it was all like clockwork. On each step as you walked up, other animals did their thing, and when you got to the top and you sat down on the throne, you pressed down on something and a dove came out and lowered the crown on your head. It was a remarkable piece of machinery.

The only one who knew how it was made was Shlomo, because he put his head into it; it was his recreation. So the Cheshbon Hanefesh says, imagine Shlomo Hamelech is away for a while, and something went wrong with the throne. It's a catastrophe because this throne was a world treasure, a unique treasure!. Everybody is saddened and they don't know what to do, and the call goes out in the town, in Yerushalayim.

Now there is a poor man with a good heart, he's a tinsmith, he puts patches on your roof, if your roof leaks he puts tin patches on your roof; he knows how to use tin a little bit. He heard what was doing in the king's palace, so he packed some pieces of tin and a hammer and some tacks, and put it in a carpet bag and came and knocked on the palace gates and he said, "I heard what's doing and my heart hurts me, I volunteer to fix the king's throne."

Would they let him look at the throne, would they even let him approach the throne? It's a danger, he would give it one bang and he would ruin it, they would never let him get that close to the throne. So the question is what is more complicated, Shlomo Hamelech's throne or the human body? The human body is complications upon complications; the smallest thing in it has so many processes that we don't even know how to begin describing them. It's remarkable that every time they publish a medical journal, they are revealing more and more depth in each subject. It's accelerated today, which means last week they didn't know these things, last year they were ignorant of fundamental things. It's speeding now, the knowledge.

So let's say, 30 years ago you went to a physician, he had no idea of these things, 30 years ago I don't know if the medicines of today were known, he went with complete trust to the physician. Now there should've been a law against it, nobody should be a physician, they don't know anything. Thirty years ago a physician was an ignoramus, today if he came back to this world and he had a conversation even with someone in medical school today, they'd laugh in his face. He was ignorant of the elementary things, but we walked in with respect and we let him do whatever he wanted.

So the question is how could you do such a thing? Don't forget, today's physicians will be considered ignoramuses fifty years from now, so how could you trust them? The answer is, Hakadosh Baruch Hu made a decree, mikan shenitein reshus l'rofeh l'rapei, I give permission, let him bungle and I'll try to help him out.

Therefore we don't know anything about medicine just the most superficial things on the surface, we are scratching the surface. We have to respect doctors because Hakadosh Baruch Hu wants them to do a job; they are His messengers. So if they have yiras Hashem and they are doing it l'shem shamayim, a doctor can be amalach! Therefore a doctor really could be a source of inspiration, because the doctor sees things that you don't see; he sees the marvels of the body. There is so much that a doctor knows that you don't have a chance of knowing, a doctor can be intoxicated with Hashem! He sees the miracles in everything, how things are complicated and purposeful.

But what do they do, they take this garment which is made to advertise the greatness of Hashem, and they use that as a mechitza and cover-up, not to see. Therefore up till now the doctors have been the most ardent advocates of atheism.