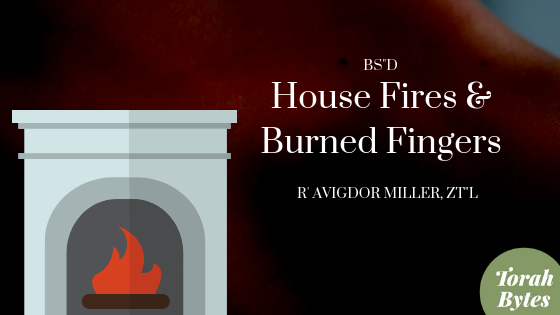 Q:
If I had a fire in my house, does that mean I have to think about doing teshuvah?

A:
If a fire took place, chalilah, in somebody's house, does he have to think about teshuvah? Absolutely. Not only if a fire took place. Even if a person touched a hot pot by accident and burned a finger. Of course, you should run to the sink and keep your finger under cold water, that too. That's the first thing. But you have to think, "Why did this happen to me?"

We learned אם רואה אדם שיסורין באין עליו יפשפש במעשיו - If one ne sees that any sort of trouble is coming upon him, he should search out his deeds and do teshuvah (Brachos 5a). Certainly he should think that. Maybe I was pointing at somebody and talking lashon harah with my finger. Or something else. Of course you have to think. That's why Hashem sent it.

We forget about Hashem, so He reminds us. Now, if you had been thinking about Him in the right way, could very well be that He wouldn't have burned your finger. And therefore, anything that happens in this world is for the purpose of making us think about Him. And ignoring these things is ignoring the reason that you're in this world - to become more and more aware of Hashem.