How Do Women Earn Olam Haba? 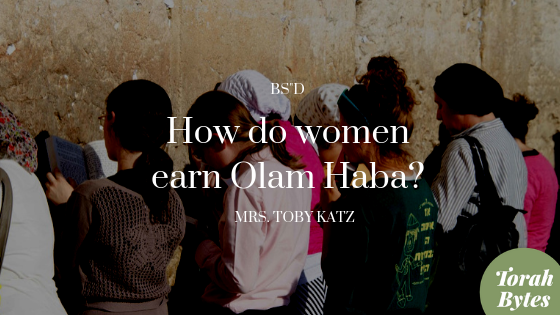 The Status of Women: the Image of G-d, and the World to Come


Question: I am having a crisis. I used to believe men and women are different but equal in Judaism but then apparently there are these sources that say otherwise [questioner linked to an external blog with lists of sources .ed] Some believe women are not made in the image of G-d.

There is also that women enter Olam Haba only in the merit of her husband, not on her own merits. So those unmarried, have a husband with intellectual disabilities or are not as strong learners as others, etc. are gonners.

I am very resentful because I feel I have been tricked all these years.

Answer: You have not been deceived all these years. The blog you came across is one-sided and therefore misleading. I could write many pages refuting those sources with other, equally authoritative sources on the other side.

I highly urge you to go to Shiurim (Torah classes) given by men and women you can respect and have a give-and-take conversation with. Don’t try to learn Torah from blogs, that’s my first piece of advice.

Before I address a few of the issues you raise, I want to introduce my remarks by recommending two books to you that you will absolutely love.

[1] The first is a book called Carry Me in Your Heart, by Pearl Benisch. I am going to quote part of the foreword:

He added, “When I mention the name, you will all agree with me that it wasn’t your grandfather, it wasn’t one of these great rabbis, but it was in fact this person.”

Can you imagine that the chassidim and the misnagdim would all agree on who did the most for Am Yisroel in the whole century?

Rav Chaskel mentioned the name…and they all agreed with him. The name was Sarah Schenirer.

When she had the idea of establishing a network of schools for girls and women, she faced stiff opposition. But the Chofetz Chaim, the Gerrer Rebbe and the Belzer Rebbe all gave her their blessings.

The single person who did the most for Klal Yisrael in an entire century was a woman—a woman on fire with love for the Torah! Carry Me in Your Heart is her biography, a beautiful book.

[2] The second book I want you to read is by the wonderful writer Sara Yocheved Rigler, and it is called Emunah with Love and Chicken Soup: the story of Rebbetzin Henny Machlis, the Brooklyn-born girl who became a Jerusalem legend.

Henny Machlis was a warm, giving, generous soul who together with her husband, Rabbi Mordechai Machlis, welcomed between a hundred and a hundred and fifty Shabbos guests into their small apartment every week for years! In the book there are numerous stories by men and women who were influenced by her, secular Jews who found their way back to Torah because of her, religious Jews with physical or emotional hardships who were healed by her loving words and welcoming manner, her open door to every kind of Jew under the sun.

Henny died of cancer a year ago at the age of 57. Her death brought an incredible outpouring of grief across a broad spectrum of Jews in Jerusalem and many other cities and countries.

This is from the book:

Remembering his beloved wife, Rabbi Machlis sums up, “A very great percentage of my accomplishments are directly linked to Henny’s love and support.”

Now I want to say just a couple of quick things about the blog you came across. The blogger has cherry-picked negative quotes about women, ignoring the fact that for every such negative source there are more sources that are very positive towards women. There are so many that I hardly know where to begin! Hashem Himself tells Avraham to listen to Sarah, and Rashi says her level of nevuah (prophecy) was higher than her husband’s. Shlomo Hamelech (King Solomon) wrote a paean to the ideal Jewish woman, Eishes Chayil (a chapter of the Book of Proverbs, Mishlei) which is recited in every Torah home on Friday nights. This woman is described as a loving wife and mother whose husband and children rise up and praise her. But she is also described as an astute businesswoman, an artisan, a generous philanthropist, a wise woman.

The Gemara says that a man has to honor his wife more than himself. It also says that he has to be careful not to hurt her with words (or in any other way) because Hashem counts her tears. I could go on for pages with more and more such sources.

In regard to the specific items you questioned, I can tell you unequivocally that women are created betzelem Elokim and that women do have a chelek in Olam Haba—where they receive full reward for all the mitzvos they perform, for all the acts of chessed they do and for all the Torah they learn.

You wrote that a woman “enters Olam Haba only in the merit of her husband, not on her own merits.??

Let me explain something here. A woman is exempt from the obligation to learn Torah on a daily basis—because the Torah places a higher priority on her other obligations. Nevertheless, if she encourages and enables her husband and children to learn Torah, she shares in their reward just the same as if she had learned the Torah they learned.

This does not mean that this is the only way she can enter Olam Haba. It doesn’t mean that she has no share in Olam Haba for her own Torah observance and good deeds.

Furthermore, a woman who is not married or does not have children is equally created betzelem Elokim and certainly does have a chelek in Olam Haba!

And note that to “enable?? a husband to learn Torah doesn’t necessarily mean that she works for a living while her husband learns Torah full time. ”Enables” means that she does whatever she can to spur her husband to study, even if it’s just half an hour a day. But she is also rewarded for her own Torah learning!

Also, a single woman – or anyone—who enables other people to learn Torah, for example, by donating money to a yeshiva or Bais Yakov – also receives great schar (reward), regardless of marital status.

It is important to note that while a man has a halachic obligation to marry and have children, a woman has no such obligation. There are women who never marry or have children, sometimes because they don’t want to but more often because of circumstances that are out of their control. Each and every person, male or female, is put on this world to fulfill his or her own unique mission from Hashem. If it is Hashem’s will that a certain woman will not marry or will not have children, then she has a different mission. If she fulfills it, she will be amply rewarded by Hashem.

How can you know what your mission is? It can change, but at any given moment, you look at your circumstances, your talents and abilities, and you try to use what you have to serve Hashem and to be kind to other people. That’s your mission.

You can be one hundred percent certain that a woman who fulfills the mitzvos of the Torah to the best of her ability, who davens, who learns Torah, who does acts of chessed, who tries to serve Hashem during her time on earth – that that woman has a share in Olam Haba —whether or not she ever marries.

I have much more to say but this is already too long. But feel free to write to me again either on this forum or privately, and beli neder I will do my best to answer.