How to Become a Successful working Ben Torah, a Kovea Itim La'Torah 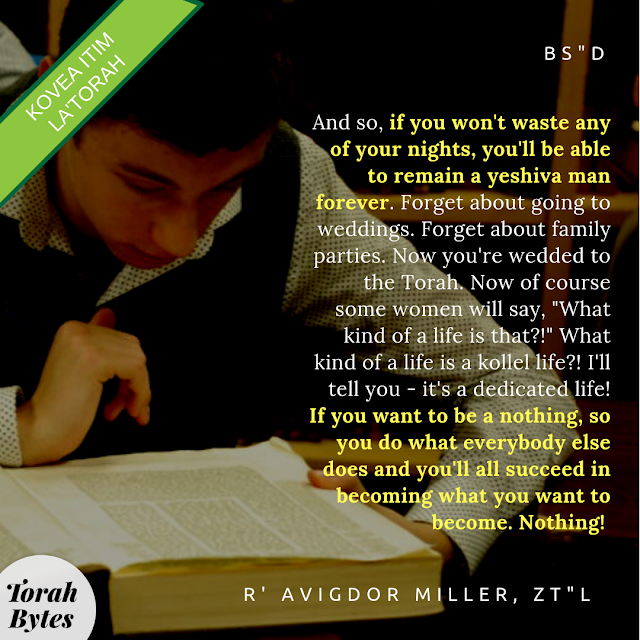 Q:
Can a kollel man who leaves the yeshiva still remain a yeshiva man even while he's involved in business?

A:
To some extent he can. But it will require a great deal of cooperation between himself and his wife, as well as certain amount of heroism and dedication on his part. I'll give you an example. Now listen carefully because it means you. And it means me too.

We have people who come here Friday night. They come here about seven, seven-thirty and they sit here learning till almost eleven-thirty at night. They're working people, professionals. They sit here in the shul for four hours on Friday night. Some a little less. That's the program for dedicated men with dedicated wives. The women of course have to understand that, in order that it should work. They want it and they encourage their husbands. On motza'ei Shabboswe have the same thing again.  People come here until late until after eleven o'clock and learn here in groups and individuals. It's a great phenomenon. But in ancient times that was the Jewish way of life.
On Shabbos afternoon people come to study here, and in the longer days they study all day long Shabbos afternoon. And some people study all day Sunday. There are about four shiurim here on Sunday and people attend all of them,  and then they sit until late and they study Torah. Now that's an example how a person  can continue to be a yeshiva man even after he leaves the yeshiva.

Now this man who wants to become great, he can't afford the luxury of wasting all those odd hours that most people waste. A yeshiva man has to get up Shabbos morning early to learn. A yeshiva man has to spend Shabbos studying. Shabbos night he can't go out to melaveh malkahs with the family. He can't visit, he can't go to weddings. A yeshiva man who leaves the kollel and he begins a life of productivity in gashmiyus, must dedicate himself to Torah learning as well.
That's what the Jewish nation once did and that's an ideal which many people are beginning to see today. And therefore if the wife cooperates, she doesn't demand the husband's presence home. She understands that it's her partnership. The fact that he is making progress, that he's forging ahead in learning - that's her zechus; she is a one hundred percent partner. And with such a great partner in life he can forge ahead, as long as he's not lazy and he's willing  to carry the brunt of a career of study.
I recall once -  it was at a melave malkah in the old building and I said over from the Rambam: הרוצה לזכות בכתרה של תורה - "Anybody who wants to earn the crown of Torah,  אל יאבד אחת מלילותיו -  he shouldn't waste even one of his nights."  He has to work by day, what could he do? But he shouldn't waste even one of his nights. That's what Rambam says. And a man who was sitting there heard that. And I saw that it went into his ears and he changed his way of life. He became great subsequently. He was a working man and he became great in Torah. And once his wife had to attend a wedding in Riverside Plaza uptown, but that night was a shiur. So he took his wife by car to Riverside Plaza and left her there and he came back to attend the shiur. Then he went all the way back to the hall to bring her home. That's dedication!
And so, if you won't waste any of your nights, you'll be able to remain a yeshiva man forever. Forget about going to weddings. Forget about family parties. Now you're wedded to the Torah. Now of course some women will say, "What kind of a life is that?!" What kind of a life is a kollel life?! I'll tell you - it's a dedicated life! If you want to be a nothing, so you do what everybody else does and you'll all succeed in becoming what you want to become. Nothing!
Tape # 204 (February 1978)
Jewish Man Kollel Kovea Itim La'Torah Rabbi Avigdor Miller Working Yeshiva