How to Celebrate Tu B'Shvat 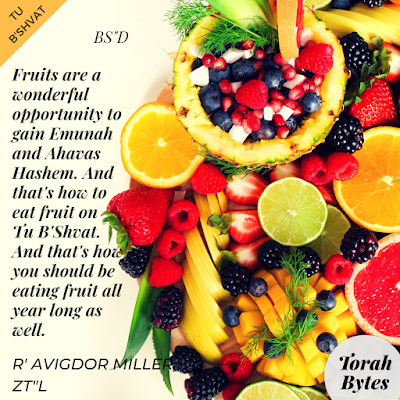 Q:
How should we celebrate Tu B'shvat?

A:
There was a minhag in Yerushalayim, I don't know if they do it there today, but in the olden days there was a minhag that chachomim came together the night of חמשה עשר בשבט and they ate peiros. But eating is only a superficial act that is meant to awaken your mind to thinking thoughts of Hashem. Because that's what fruit are for - to remind you about Hashem.

Now we're talking about great men here! The gemara is telling us something here!  We have to know that peiros, fruit,  are one of the wonderful creations of emunah. ונחמד העץ להשכיל. Fruit is most desirable because it brings wisdom. Look at a beautiful orange, or a beautiful apple. Why is the color so beautiful? Is it an accident? It wasn't beautiful when the fruit was still green, when it was sour and unripe. Only when it became fit to eat, then it turned into a beautiful yellow or a beautiful red. Doesn't that show something?! The fruit is a demonstration of the chesed Hashem.

Tosfos explains in one place (Brachos 37a) what it means בורא נפשות רבות וחסרונן. Hashem made many different creatures and supplied them with all of their needs. But in addition to that,  על כל מה שברת להחיות בהם נפש כל חי, He also provided mankind with luxuries, besides for the things they need. לתענוג בעלמא, just to give us with pleasure. And what are the luxuries? Tosfos says כמו תפוחים, apples for example. You could get along without apples. Apples are like a dessert, they're an extra chesed. Now,  the truth is that everything is chesed. The piece of bread is also chesed. But apples are an added chesed. Hashem is not merely satisfied that you shouldn't be hungry. Let's say a guest would come to your house to eat, would you give him a big plate of bread?  A pile of bread, a mountain of bread? No; you'll give him something else as well, something to add to the bread. Some butter maybe or something. Whatever it is, something else you're going to have to give him. You can't give him just bread.

So let's say you give him a meal. And since you have a good heart, after the meal you give him some desert too. That shows that you're a real ba'al chesed.And so Hakodosh Boruch Hu gives us fruit too; He's giving us desserts all the time.

So when you pass a fruit stand, don't walk by like a horse walks by. Take a look! Those delectable fruits are resplendent testimonies to the niflaos ha'borei, the wonders of Hashem. A fruit is a miracle! Every fruit has a skin around it, that protects it, that keeps it fresh for some time. And inside when you finish eating that delicious content of the fruit, you find a coupon that entitles you to another package - the seed! You spit out that seed and it's niflaos ha'borei. What that seed has inside it is remarkable! That seed contains more information than the most sophisticated computer!

And therefore you have to know that fruits are a wonderful opportunity to gain emunah and ahavas Hashem. And that's how to eat fruit on chamisha asar b'shvat. And that's how you should be eating fruit all year long as well.
TAPE # 812 (November 1990)
Rabbi Avigdor Miller Tu B'Shvat