Immorality in the Final Generation (Vaera) 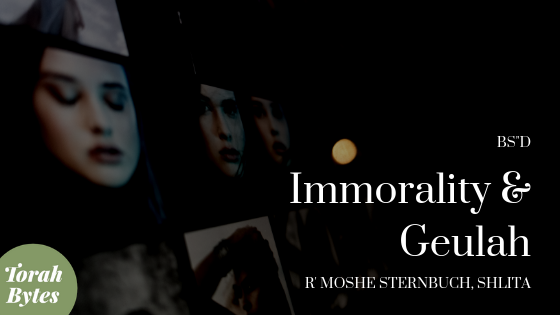 IMMORALITY IN THE FINAL GENERATION

based on the Droshos of R' Moshe Sternbuch, shlita

“And I will make a redemption between My people and your people” (8:19) Rashi: Which will set apart My people from your people.

The Baal Haturim on this possuk cites a tradition connecting this possuk to one in Tehilim (111:9): “He has sent redemption to His people, He has commanded His covenant for ever”. What is the connection between these two pessukim?

The late Satmar Rebbe, Rav Yoel, explained that Bilom in his prophecy saw that the main test for the Jewish nation at the end of days will be matters pertaining to immorality. That generation will be extremely dissolute, and all sorts of tumah will be widespread to contaminate the nation. Indeed, the Internet has had this effect to an unprecedented extent in Jewish homes. Moreover, the Israeli army is almost the only one in the world which drafts women, and currently they have also made a point of drafting girls who have become observant, imprisoning them until they agree to be drafted.

Bilom foresaw the generation at the end of days, and understood from this that the strongest weapon to incur divine wrath against the Jewish nation are those forces of tumah. Hence, he advised Bolok that instead of waiting for the end of days he should subject the nation to the test of immorality here and now by causing them to sin with the Midianite women.

Based on this, the Baal Haturim is telling us that in order to merit redemption it is necessary to preserve the covenant of the bris, which sets us apart and keeps us distinct from the Egyptians, physically and morally.
Geulah Giluy Arayos immorality Pritzus Rabbi Moshe Sternbuch Redemption Vaera Zenus