In for a Penny,in for a Pound (Beshalach) 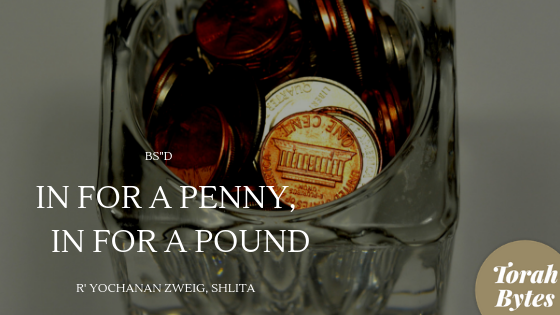 In for a Penny, in for a Pound

It was told to the king that the people had fled; and the heart of Pharaoh and his servants turned regarding the people, and they said, "What have we done that we have released the Israelites from serving us?" (14:5)

Rashi (ad loc) explains that although Moshe and Bnei Yisroel had only requested a three day "furlough," it became apparent that they weren't planning on returning. This inflamed the passions of the Egyptians who were then marshaled by Pharaoh to pursue Bnei Yisroel, which led to their catastrophic defeat when they all drowned in the Red Sea.

Rashi makes an intriguing comment as to why the Egyptians were so incensed: They were upset that they had been taken advantage of. Bnei Yisroel had asked their Egyptian neighbors to borrow valuables - in fact, Rashi explains (12:35-36) that the Egyptians insisted on giving Bnei Yisroel more than they asked for - and when it appeared that Bnei Yisroel wasn't planning on coming back to return their belongings they decided to pursue them.

But Rashi's explanation is problematic: Why does Rashi change the simple meaning of the possuk? The verse says explicitly that they were upset that they had freed Bnei Yisroel from slavery! Why does Rashi add another rationale as to why they decided to pursue Bnei Yisroel?

In truth, one has to ask; after suffering through a year of ten totally debilitating plagues - ten plagues that were both miraculous and clearly aimed at them for their treatment of Bnei Yisroel - how could the Egyptians possibly consider engaging Bnei Yisroel once again through battle?

In psychology there is a well known theory called "escalation of commitment." This refers to a pattern of behavior in which an individual or group, when faced with increasingly negative outcomes from some decision, action, or investment will blithely continue that path rather than alter their course - something which is irrational, but in alignment with decisions and actions previously made. In business this is called "throwing good money after bad."

Why would people continue to do something that is logically irrational and choose to continually ignore the increasingly negative results of their actions? Why don't they just cut their losses and move on?

The answer is that nobody wants to feel like an idiot. Admitting that you made a poor decision before also means admitting that your judgement was faulty. Many people will do anything they can to avoid feeling that they made a foolish mistake. They will therefore pay almost any sum of money to try and show that their original decision was valid. If there is even the smallest of chances that they can salvage their original poor decision they will pour resources into that course of action in the unlikely hope that it will eventually pan out.

This is what bothered Rashi. Hashem had made the Egyptians free their slaves; essentially they had no choice as they couldn't continue to face the wrath of Hashem. They had to free their slaves, but giving them their silver, gold, and valuable articles of clothing was done of their own volition. They had not been commanded to give Bnei Yisroel anything. They had "lent" them their valuables of their own free will. They thus felt duped and foolish. The decision to pursue Bnei Yisroel was to try and rectify an issue of self image. People will do anything they can to repair that image, often leading to their own self destruction.
Beshalach Rabbi Yochanan Zweig