It Takes A Genius to Fake a Mistake 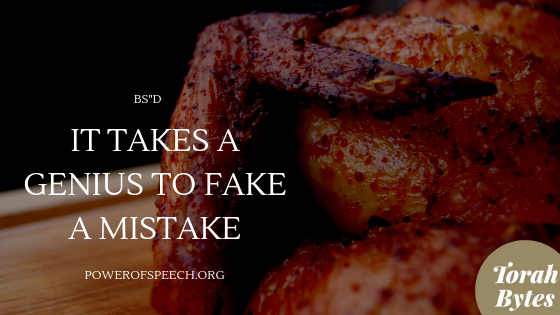 It Takes A Genius to Fake a Mistake

A city hired a new rav, who had received semichah from Rav Yitzchak Elchanan Spector. Despite the Rav’s credentials, the community frequently questioned his decisions. One day, a chicken was brought to the Rav to determine its kashrus; after studying the situation and the halachos, he declared it kosher.

Once again, the learned men of the community took issue with his ruling. This time, they researched it themselves and found that according to the Shach, the chicken was treif. With evidence in hand, they ran to the Rav and produced their proof that he didn’t know what he was doing.

The Rav feared that perhaps they were right. Perhaps someone who made such a mistake had no business answering she'eilos. He wrote a letter of resignation and sent it to Rav Yitzchak Elchanan.

Rav Yitzchak Elchanan wouldn’t accept the resignation. Instead, he wrote a response proving the Rav’s critics wrong, citing a wealth of sources to support his position. He sent this letter to the head of the community and of course, when the Rav heard that his decision had been vindicated, he was thrilled.

However, his vindication was short-lived. Not long after the letter arrived, a telegram arrived. It conveyed this terse message: “Regarding the letter I just sent you, I was mistaken. Rav Yitzchak Elchanan.”

The bad news was that the chicken was indeed treif, but the good news far outweighed the bad. Rav Yitzchak Elchanan Spector, the Kovna Rav himself, had made the same mistake the Rav had made! Apparently, making this mistake wasn’t proof of unfitness. It was proof of being human.

When Rav Isser Zalman Meltzer heard this story, he commented that Rav Yitzchak Elchanan’s genius wasn’t in sending the letter and then the telegram to contradict it. It was in his willingness to pretend to blunder just so that the Rav's dignity could be restored.

As heard from Rabbi Ephraim Eliyahu Shapiro on powerofspeech.org