Messages from G-d through His agents (Yisro) 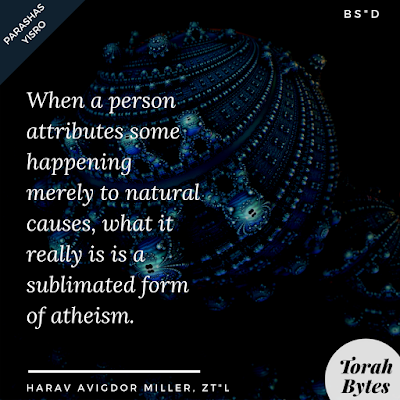 Messages from G-d through His Agents

When a person attributes some happening merely to natural causes, what it really is is a sublimated form of atheism. Of course Hakadosh Baruch Hu acts through causes, absolutely. You know, the textbooks try to ridicule the old generations; they deride the ancient ideas of attributing epidemics to acts of G-d. The scientists think that they’re smarter because they know that there are bacteria; because they have the tools today to see microorganisms so they think they know much more. But that’s because they don’t understand how the ancients thought.

Everybody in the ancient world understood just fine that Hakadosh Baruch Hu acts through agents. What the agents are, that’s a different story. But they believed in agents then too. Only that because the scientist today can see the agents better, he can study them, analyze them, and write scholarly papers about them, so what happens? This educated fool begins to believe in the agents themselves, that’s all. But all that is just a wicked mix of education, hubris and ignorance that leads him on the path toward foolishness; because there’s no question that you can be an up-to-date scientist and still understand that all the natural causes are agents of Hakadosh Baruch Hu. And therefore, the wise person, the one who lives with emunah in Hashem, is prepared to look at all the events in this world, even the small and seemingly unimportant mishaps in his own life, as messages from Hashem.