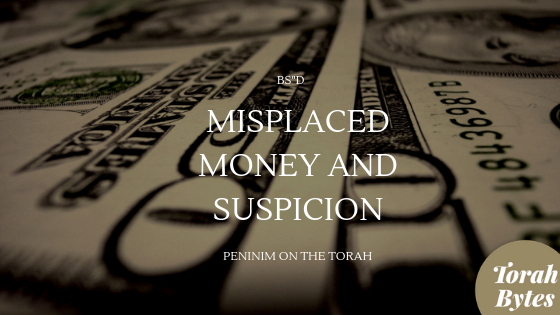 by Peninim on the Torah

In 1942, an elderly woman arrived in Eretz Yisrael and immediately proceeded to the home of the grandson of Horav Avraham Shaag, zl, who was the head of the rabbinical court of the city of Koibersdorf, himself a talmid, student, of the K’sav Sofer. Apparently, this woman came for a reason: she needed him to take her to Rav Shaag’s grave. The man looked at the woman incredulously. Surely, she must have a good a good reason for this request. She related the following story:

Rav Shaag was the Rav of a large kehillah, congregation. His reputation for honesty was impeccable. He was, thus, often asked to hold money for people for safekeeping. When someone deposited money with him, he would place it in a special envelope for safekeeping. One day, a businessman came and asked if he could leave a sizable amount of money with the Rav. Rav Shaag agreed, but forgot to put it into the standard envelope, instead opting to place it between the pages of his Gemorah. When he concluded learning, he returned the Gemorah to its rightful place on the shelf and promptly forgot about it.

A few days later, the man who had deposited the money came to retrieve his deposit. Rav Shaag immediately went to the envelope and almost passed out when he saw that the money was not there. He had forgotten that this time he had put the money in a different place. In the back of his mind, he suspected the Jewish maid of “borrowing” the money. He would never dare to accuse her without proof, so he set about gathering funds to reimburse the man. He told him it would take a few days, during which he cleaned out his own bank account and borrowed from members of the community. He had lost the money. He must pay it back.

The Rav could not figure out how he could have misplaced the money; thus, in the back of his mind, he had a gnawing feeling that the mesharshes, Jewish woman who served as maid and all-around help in the house, could have “borrowed” the money. From that day, however, he and his rebbetzin kept this terrible feeling in the back of their minds.

A number of months passed, and Pesach – with its cleaning and turning everything in the house asunder – loomed in the very near future. As might be expected, when they were clearing out the bookcase and then each individual volume, what was to fall out? The missing money! One can only begin to imagine the personal pain experienced by Rav Shaag knowing that he had (in his mind) wrongfully suspected a young Jewish woman. He was miserable and could not reconcile himself with it. Finally, in order to assuage his conscience and in some manner expiate himself personally, he called in the mesharshes, told her the story, and begged her forgiveness for wrongful suspicion. As a token of his profound shame and remorse, he offered to give this poor woman anything in his house. (We must remember that he had never in any way indicated to this woman the unfounded suspicion that was in his mind. Nonetheless, due to his extraordinary integrity and virtue, he wanted any vestige of personal ethical impropriety expunged.)

The woman replied, “Chalilah, Heaven Forbid, should I have any taanos, feelings of reprimand, against his honor. I was not hurt, because I did not know. However, since his honor insists on ‘doing something’ to ameliorate the incident, I actually do have a request. It has been fifteen years since my husband and I were married. We have yet to be blessed with a child. I ask that his honor bless me that I conceive and have a healthy child.

“Rav Shaag happily acquiesced to her request, and, one year later, she gave birth to a healthy little girl. I was that girl. My mother was the misharshes. My mother, aleha ha’shalom, aspired her entire life to travel to Eretz Yisrael, to pray at the grave of the holy Rav who granted her the blessing of her life. Sadly, her dream was not realized. I have been blessed finally to come to the Holy Land. I now want to fulfill my mother’s request.”
Mishpatim Peninim on the Torah Rabbi Avraham Shaag