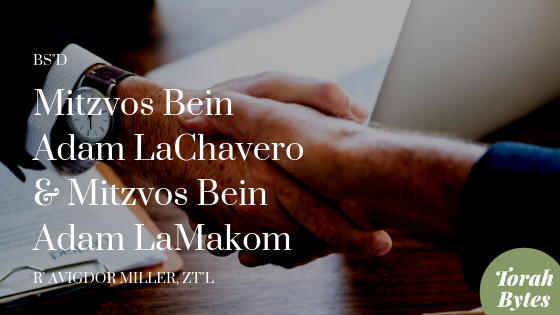 Rav Avigdor Miller on The Secret of Bein Adam La'chaveiro

Q:
Is it true what the Rav implied earlier that mitzvos of bein adam la'chaveiro, between man and his fellow man, are more important than mitzvos bein adam la'makom, between a man and Hashem?

A:
Are mitzvos between a man and and his fellow more important than mitzvos between man and  Hashem? The answer is that bein adam la'chaveiro is bein adam la'makom. When you deal with your fellow Jew, that's done in the service of Hashem. That's why we said tonight that teshuva is "shuva ad Hashem Elokecha."  Ad Hashem is the foundation of teshuva. Everything that we said here tonight about improving our avodah of bein adam la'chaveiro is not because of "chaveiro" - it's because of Hashem! It's all Hashem! There's no such thing as a dichotomy between the the two types of mitzvos of bein adam la'makom and bein adam la'chaveiro. To love your fellow is exactly the same as loving Hashem. But we have to do it with the thought that this Jew is "banim atem la'Hashem Elokeichem" - a child of Hashem. That's how you should love him - because he's a son of Hashem, a child of Hashem. So that way, if you love him then you're loving Hashem.

And therefore, all of our efforts that we will make in the subjects we discussed tonight - understanding tzelem Elokim, appreciating the greatness of Klal Yisroel, loving your fellow Jews - these are all based on the concept of avodasHashem. It has to be for Hashem.
TAPE # E-249 (December 2000)
Bein Adam LaChavero Bein Adam LaMakom Rabbi Avigdor Miller