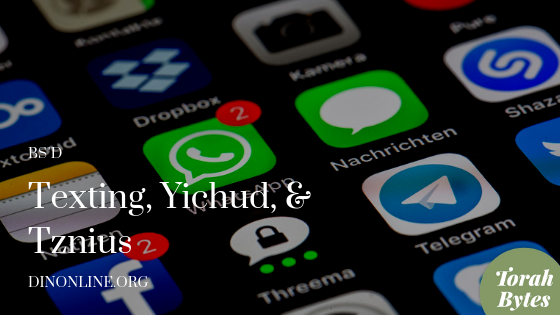 The following Q&A's are extracted from DinOnline.org which explain the proper and improper online interactions between opposite genders via texting and/or email.  Now some might claim that texting is not similar to talking via voice.  See the answer given in the first situation below.  Does remotely texting between a man and a woman violate the negative prohibition of Yichud (seclusion)?  This is addressed in the second question.

For the final p'sak, consult your trusted competent Orthodox Rav.

Is a single girl allowed to talk by texting to a married man whom she works with after work hours? Texting about day to day subjects, asking opinions….there’s no seeing each other after work, just texting over phone from far.

Essentially texting and talking are similar to each other, and there isn’t any difference if the man is married or not. The reason why men and women should not be talking to each other, aside for when it is needed for a specific purpose, is because the torah does not want us to promote social relationships because it will lead to many aveiros. By texting him after hours, it is deepening the relationship, the same way talking on the telephone does. Unfortunately the yetzer hora has his way of making the “very innocent” day to day questions into a closer feeling for the other person. Besides, the texts that will be done in the evening are going to serve as a continuation of the relationship at work…
It is important for you to find other females who you can ask their opinion, get advice and discuss things, and be your friend, so you won’t have to come on to the men that you work with.

Rabbonim of the Beis Hora'a

If a woman and man both over the age of bar/bas mitzvah converse often via e-mail, instant messaging, and mail is this a violation of yichud? Or does yichud only apply when the two are in person?
Would it make a difference if the woman was the man’s shidduch?

There is no issue of yichud if the two people are not secluded in the same place, and in person. Regarding conversing between a man and a woman, the general rule is that is not permitted because it brings the two people close to each other, which will lead to undesirable thoughts and actions. However what is considered derech eretz, such as saying good morning, and being polite is permitted, or what is needed for a purpose is permitted. Therefore just plain texting, about unimportant things should not be done. This is the general rule regarding the relationship between men and women. There are relationships that require a higher level of derech eretz, such as with family members, etc.
I don’t understand your second question, “if it was the man’s shidduch”. If the two people are dating or engaged and the texting is needed to develop the correct relationship, then it would be permitted. However, if they were dating, and it is no longer for the purpose of marriage etc. then obviously this man or woman is no different than any other person of the opposite gender.