One and the Same, (Mishpatim) 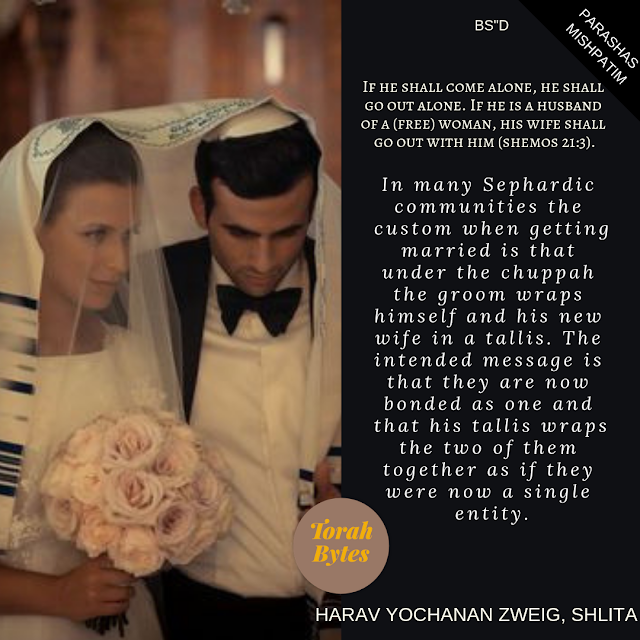 One and the Same

The Torah here is discussing the laws of a "Jewish servant - eved Ivri." This refers to one who is sold into servitude to settle debts he incurred when he stole from others. During the years of servitude his wife is supported by his master; when he is freed from service, the financial responsibility for his wife now leaves the master and once again is upon him.

Rashi (ad loc) points out that the Torah uses a very unusual word to describe someone as unmarried - "begapo." Rashi goes on to explain; "the word 'begapo' literally means coattail - that he came in as he was; single and unmarried, in his clothing, within the edge of his garment." This is a rather unusual way of saying "bachelor," what is significance of using this word?

The word bachelor was first used in the 1300's to describe young men (squires) who were beginning the path to knighthood. The word therefore implies someone young and without experience. In fact, even today it has some of the same implication; the first degree one achieves in college is referred to as a bachelor's degree. But the Torah uses a very specific term; what is the purpose of using the word coattails for bachelorhood?

At first glance, one might think that it simply refers to something that is also similar to the English language expression "he came with nothing but the shirt on his back." But Rashi is very specific that it is referring to the "edge" of the garment. What does this really mean?

In many Sephardic communities the custom when getting married is that under the chuppahthe groom wraps himself and his new wife in a tallis. The intended message is that they are now bonded as one and that his tallis wraps the two of them together as if they were now a single entity.

The Torah here, by using a word that means the edge of a garment, is describing what a marriage is. In a marriage, the edge of my garment no longer covers just me; it is covering my wife as well because we are now a single entity. If the edge of my garment only covers me then by definition I am unmarried. Therefore, if the Jewish servant comes in with only himself at the edge of his garment - "begapo" - he must be unmarried.
Eved Ivri Marriage Mishpatim Rabbi Yochanan Zweig