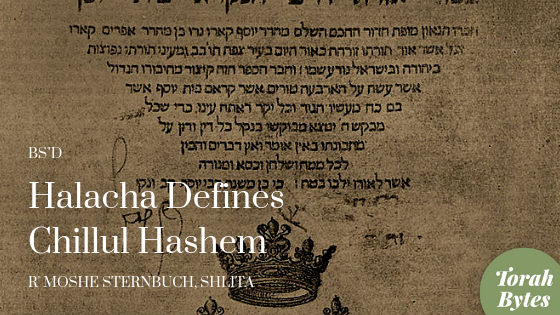 Based on the droshos of R' Moshe Sternbuch, shlita

When Hashem told the nation to borrow gold and silver from their Egyptian neighbors, and not return them, there may have been some Jews who argued that Moshe, who was highly esteemed in the eyes of the Egyptians, would look like a dishonest person when they would leave Egypt with the gifts without returning them, and that would cause a Chillul  Hashem.  Hence, the passuk emphasizes that even though he was held in the highest regard by the Egyptians, this action on his part did not cause a Chillul Hashem.  On the contrary, if that was the will of Hashem, then that was the right thing to do.

When the Israeli government wanted to enlist all girls in compulsory military service or national service in the 1950s, Rabbonim organized a demonstration overseas to protest the decree. Some people argued that it would cause a chilul Hashem if we would show non-Jews that there was an internal dispute between Jews  But the Brisker Rav and the Satmar Rebbe responded that the parameters of chillul Hashem are determined by Halacha and not by the superficial opinions of the masses.  If Halacha dictates a certain course of action, that can only result in a Kiddush Hashem.
Bo Chillul Hashem Kiddush Hashem Rabbi Moshe Sternbuch