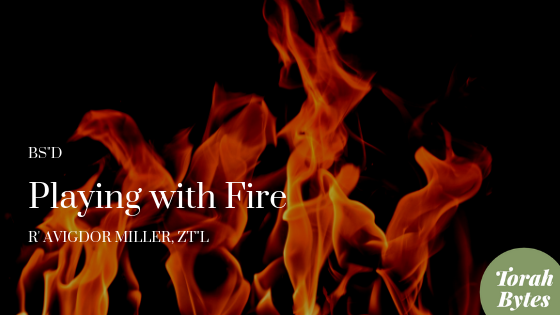 Rav Avigdor Miller on The Destruction of America

Q: Why is it wrong for single men to talk to women?
A: Not only single men; any man shouldn't talk to women. And women shouldn't talk to men. We have to know that you cannot fool around with fire. The subject of men and women is fire. Only that today people have lost sight of lessons that once were well known to mankind. Everybody understood that. Years ago in America, a boy's high school was in this part of the city and a girls' high school was far away! Goyim understood that it's fire!

Today however, they're already in the fire and they're suffering. America is a ruined county today. The youth has turned into garbage. The youth is nothing today. The American army is a joke. In the army today it's nothing but dope and disobedience. Chas v'shalom, if America had to go to war today, chas v'sholom. They couldn't have any kind of a confrontation with any foreign army. We saw what happened in Vietnam already. It's a demoralized country. And one of the main reasons is co-ed, the mixing of the genders in the schools. There are other reasons too because one wickedness brings another wickedness, but co-ed melts away the morals. It rots the core of the nation; and therefore we are suffering today. And it costs us money too. There's no end of money that we're paying in taxes as a result of this demoralization of society. We're paying no end for the hospitalization of broken people, immoral people who bring illness upon themselves because of the proliferation of immoral behavior. We're paying for supporting welfare for broken people with ruined lives—people who sit by themselves in apartments because they're not capable of living normally because they're ruined.

Now, it takes time to go into this but people who study this know that one of the main reasons for America's spiral downward — I say downward; American had its downfall already. America is a ruined country. And the most significant cause has been this carelessness, this promiscuity in immorality.

And therefore it's common sense. Anybody who has to have contact with the opposite gender should do so politely and impersonally. There should be a minimum of mixing. That's the Torah way; the Am Yisroel is distinguished for that. That's why our womankind is the most noble. That's why the Jewish women are princesses and the Jewish men are princes. There's no one better than the Am Yisroel when it comes to morality - and our job is to keep it that way.