Practice What You Preach (Bo) 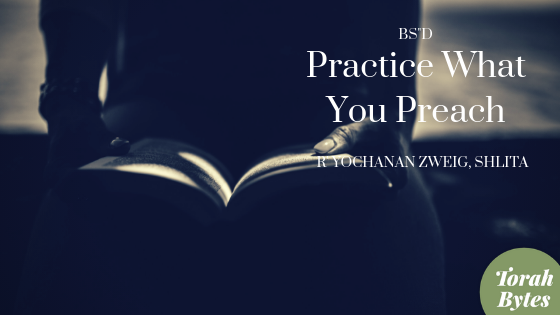 based on the Torah of R' Yochanan Zweig, shlita
And Bnei Yisroel went and did as Hashem had commanded Moshe and Aharon, so they did (Shemos 12:28).

Rashi (ad loc) is bothered by the seemingly repetitious conclusion of the possuk. In other words, the beginning of the verse clearly states that Bnei Yisroel did as Hashem commanded Moshe and Aharon; so why did the Torah find it necessary to conclude with the words "so they did"? Rashi explains that the words "so they did" is referring to Moshe and Aharon: they too, did the mitzvah of Korban Pesach.

Maharal in the Gur Aryeh (Shemos 12:28) wonders; why is it assumed that Moshe and Aharon would not have had to bring a Korban Pesach thus making it necessary for the Torah had to tell us otherwise?

Additionally, if the Torah meant to tell us that "so they did" is referring to Moshe and Aharon, why doesn't the Torah state it expressly and leave no room for confusion?

Very often, when telling our children to do something that we feel will improve their lives greatly (e.g. they should commit to studying Torah an hour a night), they silently wonder (and sometimes not so silently) why we ourselves are not modeling that very same behavior?

Of course they don't realize all the obligations that we are under (work, business meetings, school board meetings, home repairs, etc.), so how can they possibly understand why we aren't able to make that very same commitment to Torah study?

But in fact, our kids are actually right. Certainly, there are myriads of excuses we can make as to why we ourselves don't do what we are asking our kids to do, but that's exactly what they are - excuses. When one has many responsibilities there are conflicts which cannot be avoided. But our kids aren't fooled, they know when we are serious about an ideal and when we are merely paying lip service to one. Our kids also know that we have unavoidable conflicts, but they will absolutely judge what we consider to be important in our lives, by how we choose to spend our free time.

Leadership follows some of the same rules. Obviously, a leader has many responsibilities and obligations, after all, that is what leadership is all about - taking responsibility to get things done. Yet some leaders see themselves as above following certain laws that everyone else must adhere to. They forget that they too have a responsibility to follow the rules.

The Torah is teaching us a remarkable lesson about what kind of leaders Moshe and Aharon were. On the night that Bnei Yisroel left Egypt, undoubtedly, there were a multitude of things to do and Moshe and Aharon could have easily been forgiven for not fulfilling the mitzvah of Korban Pesach. But that's not the type of leaders they were; they led by example and did exactly what everyone else was supposed to do. That's what the Torah is telling us by not mentioning their names: They fulfilled the Korban Pesach like everyone else - as ordinary members of Bnei Yisroel about to leave Egypt.
Bo Rabbi Yochanan Zweig

Faulty Teachings of the Sefer HaTanya

To learn more about this, please watch this entire video.. at 8 mins into it is where R' Reisman talks about the great debate.