Proof that the Torah is Divine 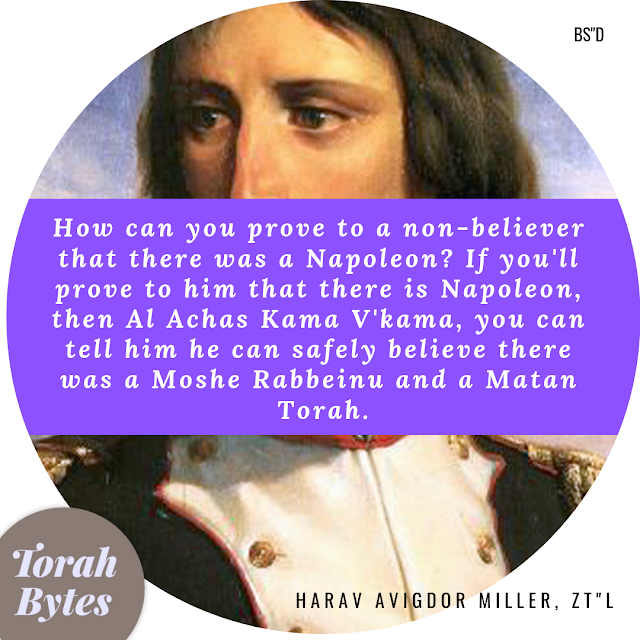 QUESTION:
How could you prove to a small believer that the Torah was Divinely given and wasn't man made?

The Rosh Yeshiva said, “Did you see Napoleon?”

“Did you see anybody that saw him?”

“How do you know that there was a Napoleon?”

There are more people that heard about giving the Torah at Sinai, than heard of Napoleon. So if you believe what everybody says, that there was a Napoleon, means you're going after a great number of witnesses, or people who are handing over traditions. There's a still greater number, because all the Mohammedan's say that Hashem gave the Torah to the Jewish people at Sinai; there are millions and millions of Mohammedan's.

Oh, there are books of George Washington, you say.

There are books about Moshe Rabbeinu, certainly. There's the whole Torah that talks about Moshe Rabbeinu. Shmosand Vayikra and Bamidbar and Devorim, and Sefer Yehoshua, and Sefer Shoftim, they all talk about Moshe Rabbeinuconstantly. Shmuel Aleph and Shmuel Bais, “you should walk in the ways of the Toras Moshe”, and Melachim Aleph andMelochim Bais, and then comes Yeshaya and Yirmaya, many books speak about him So we have books upon books, besides the books of the gentiles. So therefore, how can you prove to a non-believer that there was a Napoleon? If you'll prove to him that there is Napoleon, then Al Achas Kama V'kama, you can tell him he can safely believe there was a Moshe Rabbeinu and a Matan Torah.