The Rabbi and the Mafia 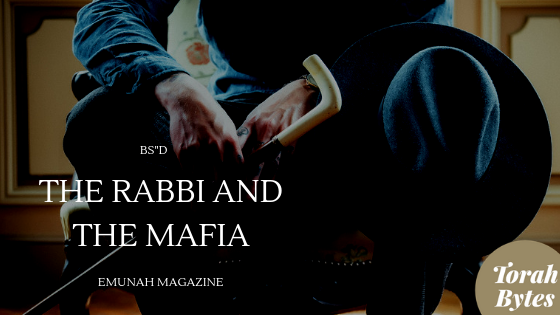 It was during World War II when twenty-four rabbis were being held in Italy and faced being returned to Nazi-occupied Europe and certain death.


Rabbi Aharon Kotler, prominent Jewish leader and founder and Rosh Yeshiva (Dean) of Beth Medrash Govoha Rabbinical College in Lakewood, New Jersey, turned to the well-known activist and subsequent author of ‘Ethics From Sinai’, Mr. Irving Bunim, and asked him who could intercede on behalf of these 24 rabbis. Having nowhere else to turn for help, Irving Bunim suggested the Italian Mafia. Rabbi Kotler urged Mr. Bunim to contact them immediately.

After contacting them, he asked Rav Aharon, “Who are we sending to the meeting?”

Rav Aharon replied, “You and I are going.”

Off they went to meet the godfather of the Mafia, Joe Bonanno. Rav Aharon did not speak English, so it was Mr. Bunim who explained the problem of the 24 rabbis trapped in Italy.

The Mafia chief asked Mr. Bunim, “Who is the elderly man sitting next to you?”

He told him, “His name is Rabbi Aharon Kotler. He is the godfather of the Jewish people.”

“Tell him I want a blessing.”

So Mr. Irving Bunim turned to Rav Aharon and in Yiddish told him, “Ehr vill a brocha fun dem rov. (He wants a blessing from the rabbi).” “Zog em ehr zol leiben lang un shtarben in bet.”
Irving Bunim turned back to the mafia chief Joe Bonnano and told him, “The rabbi blesses you with long life and you should die in bed.” [Mob bosses were often assassinated on the street and never reached old age.]

Upon hearing this, the Mafia chief replied, “I like that,” and promised within 2 weeks to arrange the freedom of the 24 rabbis stuck in Italy, which he did indeed accomplish.

Twenty-something years later, in 1968, a shiny black stretch limo pulls up in front of the Lakewood Yeshiva. Two fancy-dressed men get out and walk up to the office. They say are looking for Rabbi Kotler. Out comes a man who introduces himself.

“No, not you,” say the two Italian guys. “We are looking for an older man.”

“That was my father,” says the Rosh Yeshiva, Rav Shneur Kotler, “but he passed away a number of years ago.”

The Italian men explain that they are the Bonanno brothers, and that their father always “attributed his long life to your saintly father’s blessing. Now that he has just retired, we are taking over the business and we came here for the same blessing.”

“I’m sorry,” says Rav Shneur, “my father could do that, but I am not on that high level.”

For saving 24 rabbis from the Nazis, and with Rav Aharon Kotler’s blessing, Joe Bonanno - the Mafia godfather - lived to 97 years old and died in bed.