Something to Smile About (Yisro) 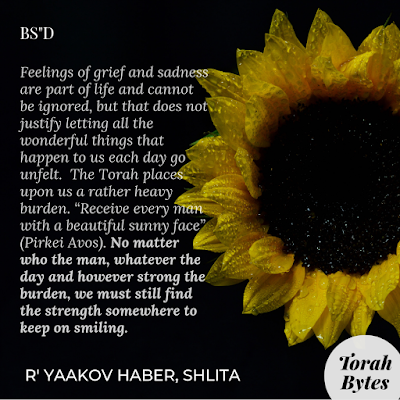 Something To Smile About

by Rabbi Yaacov Haber
The Torah recounts the reunion of Moses and his father-in-law Yisro. Moses tells him of all the wonderful miracles G-d has done for the Jews. In response the Torah tells us “Vayichad Yisro” (Exod. 18:9). Rashi gives 2 explanations for this phrase: (1) Yisro rejoiced since he was happy for the Jews (Ibn Ezra comments that the word “vayichad” is related to “chedvah”, meaning happiness); (2) Yisro was pained (here “vayichad” is taken to be related to the word “chidudin”, pins and needles).

These two explanations not only differ, but in fact contradict each other. The Maharal asks in his Gur Aryeh: Why did the Torah not choose a word that was clearer in its meaning and could not be interpreted in opposites? The answer he gives is that in fact both explanations are true! Yisro had both feelings—on the one hand, ecstasy over the glory of the Jewish people, and on the other, extreme pain over the loss of the Egyptians.

From here we learn that a person is capable of having two completely different emotions simultaneously. There is a law that upon hearing bad news one makes the blessing “Boruch Dayan ha-emes” (Blessed is the true Judge). However, if the news affects one to the extent of bringing tears to one’seyes, then one gives an extended form of the blessing: “Boruchato Hashem Elokeinu Melech ha-olam, Dayan ha-emes”. On the other hand, When someone is overwhelmed with happiness over good news that he has heard, he makes a blessing “Boruch ha-Tov veha-Metiv"(Blessed is the Good and the Maker of good).

Now the Shulchan Aruch considers a situation where someone hears of two contrasting items of news simultaneously, for example, being informed of the passing of a loved one, and at the same time, of inheriting a fortune. This person must then make the two blessings one after the other: the full version of “Dayan ha-emes”, and “ha-Tov veha-Metiv”, representing completely opposite emotional extremes! The Torah recognizes that what we have here is not hypocrisy, or schizophrenia, but a genuine case of feeling happy and sad at the same time: what is popularly called having mixed emotions. Such is the nature of man.

I recall an incident when I was in Yeshiva. A fellow student passed away, on the very day that a wedding of another fellow student had been planned. It was too late to postpone the wedding. The Rosh Yeshiva gave a speech at the funeral, in which he made it clear that although our grief was justified, we had an equal obligation to feel joy for the bridegroom, and to display this joy at the wedding later that day. The one emotion should not nullify the other.

This principle also applies to our private griefs and joys. When something bad happens to us, we feel justified in walking around with a public display of grief on our faces. But this is wrong, for we learn from the Torah that just because we are sad about one thing, that need not cancel any feelings of happiness we may have, because we are perfectly capable of having the two emotions at one time. We must always remember that our face is the one part of our body that is not our own, but a “reshus harabim"(public domain).

Even deeper, when we have a problem, no matter how small, we tend to let that dominate our whole mood. If someone wakes up in the morning to find that he has run out of coffee, he is convinced that his day is ruined, no matter how many good things might still happen to him that day. We are quite justified in grieving over an absence of coffee for breakfast, but we must not let that ruin the rest of our day, or, even less, the day of our neighbors.

Feelings of grief and sadness are part of life and cannot be ignored, but that does not justify letting all the wonderful things that happen to us each day go unfelt. In the light of the above the Torah places upon us a rather heavy burden. “Receive every man with a beautiful sunny face” (Pirkei Avos). No matter who the man, whatever the day and however strong the burden, we must still find the strength somewhere to keep on smiling.
Rabbi Yaakov Haber Yisro