Taking the Easy Way Out (Bo) 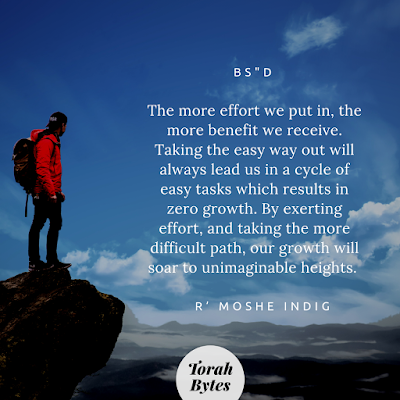 Taking the Easy Way Out

– Based on the writings of R’ Moshe Indig
In this week’s Parsha, Bo, Moshe tells Pharaoh that the “Killing of the First Born,” the tenth plague, will occur “at about midnight.” Rashi explains that Moshe said “about” in case the Egyptian astrologers miscalculated the time. Rabbeinu Bachya elaborates that the magicians had begun to believe in G-d more and more ever since the third plague. However, had they thought there was even a slight error in Moshe’s prediction, they would have lost all the faith they had acquired.

Sound familiar? How often do we rationalize things based on something small and insignificant? It was done even thousands of years ago! And the thing is that soon after we rationalize something a few times we don’t even think about it. If only we would think about what we do, and not think about a way we could convince ourselves that it’s okay, but actually think about the consequences – for good or for bad.

Why is it that we are always looking for the easy way out? Why must we always find a short cut? It’s clear that the journey is more important than the destination, yet we always seek the quickest path to the finish line. We rationalize wrongs along the way until we’re so desensitized to them that we no longer even think about them. We become like robots. We just do. So - How do we fix this?

The first step is evident in this week’s Parsha. Our Sages explain that during the plague of Darkness, Hashem wiped out all the people who weren’t interested in leaving Egypt. The ones not interested in change had no future. That is the first step – wanting to fix it. We must want to change.

The second step is noticing the bad habit. We have to take a moment to think about our actions. We ALL notice when we start rationalizing things; yet, we go along with it, because it has become part of our daily life. That is the second step – to realize and acknowledge when we are rationalizing something.

At that point, we have to make a decision – are we looking to find a flaw or rationalization in everything, like the Egyptians, or do we want to see the truth? Many of us live our lives twisting everything we hear to fit our viewpoints. We refuse to admit that our opinions can be wrong. Admitting means that we have flaws, and who wants to be flawed? That is the third step – we must be willing to admit that we have flaws and make mistakes.

One of our generation’s biggest issues is that things come to us easily. We grow so used to not putting in effort that actually exerting ourselves becomes a major hardship. The Evil Inclination feeds off this. We get in a situation where doing the right thing isn’t easy and the yetzer hara convinces us that it just isn’t worth it, so we rationalize to ourselves why it’s okay to do what’s wrong. We need to stop this. We need to be willing to do what’s right even if it means taking the longer route. This is the fourth step – understanding that doing the right thing is not always easy, and accepting to do what’s right no matter how much effort we must exert.

The more effort we put in, the more benefit we receive. Taking the easy way out will always lead us in a cycle of easy tasks which results in zero growth. By exerting effort, and taking the more difficult path, our growth will soar to unimaginable heights. But then, that’s next week’s Parsha, isn’t it?
Bo Rabbi Moshe Indig