“The Chosson” is a Criminal! 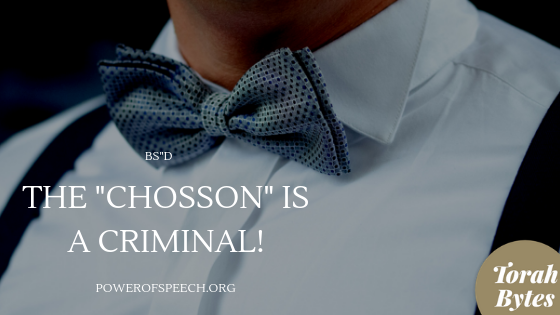 “The Chosson” is a Criminal!

As told by Rabbi Shaya Ostrov

A few years ago, I was mentoring a yasom and a yesomah who were dating. When they decided to become chassan and kallah we were very happy for them.

That summer, my wife and I were driving home from a vacation in Canada when my phone rang. “You don’t know me,” the caller said, “but I feel I have to let you know that you’ll be making a terrible mistake if you let the marriage of Chaim X go forward. He’s a criminal who spent time in jail! You have to protect the innocent kallah and prevent this marriage!”

I was shocked. I knew the young man very well, and this didn’t seem to fit. What should I do? I finally decided to call him directly and ask what the story was.

“Chaim, someone just told me that you were once in jail. Is that possible?”

“Sort of,” he answered, “but don’t worry, it’s not the way it sounds. About three years ago, my friends and I rented a car to drive to Chicago for a chasunah. Somewhere in Western Pennsylvania, at about 3:00 a.m., we were stopped at a police checkpoint and I was asked for my license. When I searched all my pockets without finding it, I realized that it must have been left behind at the car rental place. Since I was the only one who even claimed to have a license, the cop said we would have to go with him to the station to clear things up. So we hung around the police station for the next couple of hours until they verified that I really did have a license. That was my time in jail!”

I breathed a sigh of relief, and was soon happy to be able to verify his story.

Today, that couple is happily married and raising a family of sweet children.

My message to the owner of that anonymous voice on the phone is: Whoever you are, imagine what would have been lost if I had listened to you without trying to get the facts. And imagine what you would have had to answer for when you give a din v’cheshbon after 120 years.

Adapted from the Shidduch Forum in Yated Ne’eman
TALK ABOUT IT: WHAT ARE SOME SITUATIONS IN YOUR LIFE TO WHICH THIS LESSON CAN APPLY?