The Jews and Astrology 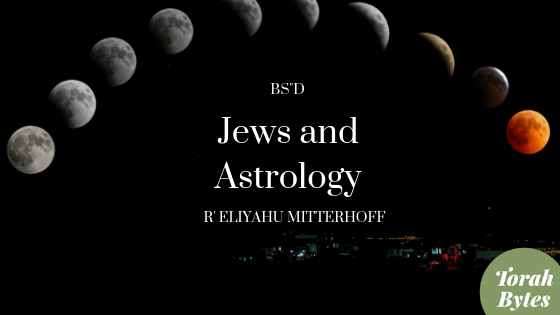 The Ramban says like this. Why is it that we have so many different commandments to remember going out of Egypt, zecher yetzias Mitzrayim? He wants to explain that since from the very beginning the world became corrupt with idolatry, why? Because they started to believe in the planets. It’s true that G-d runs the world through astrology. G-d brings kochos, certain energies of wealth, of health, of all kinds of hatzlacha, of sickness or darkness or death, everything that happens in our world, Hashem is doing it through the planets. Obviously in this case, we know by the pascal lamb, we know that by Mitzrayim Hashem Himself intervened. He was the one who took us out of Mitzrayim. But in general, the planets have influence. Therefore, the Ramban says that we have many, many mitzvos to help us remember zecher yetzias Mitzrayim, to help us remember the going out of Egypt. Why?

Because people were denying G-d. So, what did they say? They said there is a G-d. Okay, maybe there’s a G-d, but He doesn’t oversee them. “And that,” said the Ramban, “Is making man like the fish of the sea. That G-d does not oversee them, and there’s no punishment and reward for them.” Therefore, since what happened in Mitzrayim, we saw clearly that the Jewish people were chosen and taken out of Mitzrayim. And it was a wonder that every one of the 10 plagues happened. So, everybody saw that. They saw that there was a G-d greater than all of the planets and all of the forces in the universe. There was a G-d who was involved intrinsically, intimately with human beings. Therefore, we have to remember that all the days of our lives.

I just wanted to talk about this idea of astrology. Basically, if you believe only in astrology, so that means you believe in predetermination. Your wealth is determined by the stars, your health, who you are going to marry, everything that’s happening in the world, whether there’s wars or whether there’s peace is determined by astrology. And now you’re stuck. So, what kind of society is that? What kind of life is that? What if a person does not believe in free will? What kind of life does he have? Basically, he just believes he’s a cog in the wheel. His life has no purpose. He comes into the world, G-d’s going to do this to him, G-d’s going to do that to him. He’s going to make him rich, he’s going to make him poor. He’s going to make him healthy, He’s going to make him sick. All these different things are going to happen to him, and really he’s just at the mercy of the stars. This person has no relationship. What kind of life does he have, he doesn’t have a relationship to the Creator? He believes that the Creator created the universe, b'seder, okay. And he sent it into motion and the wheels just run like a Chinese prayer wheel. You spin the wheel and the wheel prays for you. There’s no pressure, no growth. Why does he have to strive to do anything? How much wealth he’s going to have is determined by the stars. What kind of life is this? This is no mesirus nefesh, there’s no growth. This, in a sense, was the god of Mitzrayim, because Mitzrayim’s whole culture was based on taava, which means hedonism. The hedonistic person doesn’t want to work too hard. So it’s a great philosophy, you know, everything’s taken care of, what can I do? Like the Indians say, shanty, shanty, let’s take a rest. And they’re relaxed, everybody’s happy, good things happen, bad things happen, what can we do? There’s nothing we can do about it. It’s a life of total irresponsibility, and together with that, it’s a life of taavas (lust), of sexuality, or overeating, of doing whatever you want to, because any you’re just an animal. And anyway, the stars are running everything and you don’t any responsibility.

That was Mitzrayim. They believed in astrology. The first astrological sign is Aries. Aries was the ram, the lamb. That’s why G-d had us kill them. It says in Chazal, the Jews were also influenced by this. That’s why He wanted the Jews to shecht the ram in the month on the 10th, they took the ram when the astrological sign was the strongest. That’s the strongest on the 10th of the month. And they shechted it on the 14th of the month. And when they did that, they wanted the Jews themselves to say, “Listen, it’s true there is astrology. But we’re not limited by it. There’s a G-d in the world.”

Now, what’s the opposite of a philosophy that believes in astrology? A philosophy that believes that there’s a G-d. That’s a whole different story. It says like this, I want you to hear this – this is Rav Moshe Sternbuch. He says, They had to make sure everybody had a bris milah. You couldn’t eat from the pesach sacrifice unless you had a bris milah. So, you had the blood of the milah and the blood of the korban Pesach on the doorposts. The Blood represents mesirus nefesh, completely giving yourself over to G-d’s will, even if it’s difficult. We start the life of an eight day old boy with the blood of a bris milah, it means a life of responsibility. It means you have to have mesirus nefesh. It’s not a life of astrology. It’s not a life where everything is just running by itself, and we don’t have any responsibility. It’s a life of total responsibility.

This is exactly what the Ramban says at the end. Don’t forget, this was all the same Ramban that said that the reason why we have to have “remember the going of out of Egypt” for everything is to acknowledge that really there’s a G-d – a G-d beyond astrology. It says, “Be as scrupulous in performing a minor commandment,” a person should be strict in a minor commandment that Hashem gave us just like a major commandment. “For all of them are major, and exceedingly beloved.” Why? “Since through them a person is constantly acknowledging his G-d, for the ultimate objective of all commandments is that we should believe in our G-d and acknowledge that he creates us.”