The League of Nations and a 6-day week 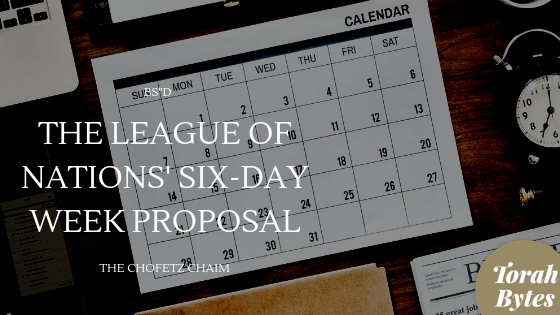 The Chofetz Chaim wrote in one of his letters, Michtevei Chofetz Chaim, Letter 106, addressed to Asher Mendelson, delegate to the Polish Senate, and others that the League of Nations, the precursor to the United Nations once proposed a six-day week.

~~~~~~~~~~~~~~~~~~~~
The League of Nations meeting at Geneva is presently planning to introduce changes in the way the days of the week are arranged [e.g., a cycle of five days of work and one day of rest[, and to produce a new calendar.  By such means, they will greatly undermine the fixing of our holy Shabbos, upon which the existence of our faith depends, and whose nullification poses a great danger to us.

We know that the matter depends upon whether a majority of nations agree.  We have heard that a few nations have already responded that they will not agree to the new calendar.  This is as a result of lobbying efforts by our fellow Jews , who approached the leaders of those governments and succeeded in swaying them in our favor.

I therefore recommend that we, too, who comprise a sizable percentage of the population, must make lobbying efforts with heads of our government so that they too reject the innovations.  As we know, our government desires to show us benevolence, so they will surely not deny us benevolence here.  But it requires lobbying efforts on our part, to convince them to agree to our petition.

I therefore turn to his Eminence to strive to persuade the appropriate ministers to agree to our petition, so that when the new calendar comes to a vote in the League of Nations, they will not agree to support it.

~~~~~~~~~~~~~~~~~~~~~~
For more information on this proposal, refer to this article here, https://www.jewishvirtuallibrary.org/the-league-of-nations
Chofetz Chaim League of Nations